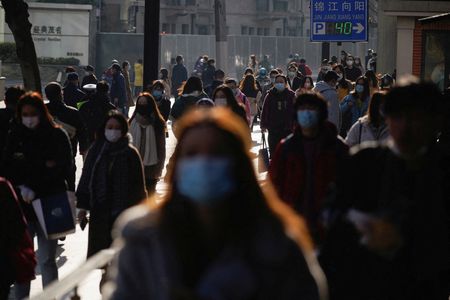 BEIJING (Reuters) – China’s strict COVID-19 policy is weighing on consumption and rattling foreign firms, but its effectiveness and the imperative to maintain stability heading into a sensitive year mean Beijing will stick to its approach, experts say.

China has reported just two COVID-19 fatality this year, retaining a tough line even as many other countries ease restrictions, imposing targeted shutdowns and travel curbs even when they disrupted local economies.

Avoiding major outbreaks is especially critical in a year when Beijing hosts both the Winter Olympic Games and the once-every-five-years Communist Party Congress, where President Xi Jinping is expected to clinch a third term as party secretary.

Beijing has been eager to burnish its record on tackling COVID-19, which a government white paper has described as among the “most important achievements” of its governance model – and often points out the high death tolls elsewhere, especially the United States.

“Stability is the number one priority next year,” said Dan Wang, chief economist at Hang Seng Bank (China). “Relaxing the zero tolerance policy will not help that goal.”

The rapid emergence of the Omicron variant, already causing many countries to backtrack or pause reopening plans, will most likely reinforce Beijing’s position. China has reported several imported Omicron cases and one locally transmitted case.

China “cannot let its guard down to the slightest degree” against the new variant, Lei Zhenglong, an official at the National Health Commission (NHC), said on Monday.

The international spotlight will be on Beijing when the Winter Games kick off on Feb. 4, before the October Party Congress provides the political highlight of the year.

ESPN reported on Tuesday that the National Hockey League will not send its players to compete in the men’s ice hockey tournament at the Olympics because of COVID-19 concerns.

Experts, meanwhile, have expressed concern about the number of older people who remain unvaccinated and the efficacy of the vaccines in use in the country, which has yet to approve foreign vaccines such as those made by Pfizer and Moderna.

Even though 80% of people aged over 60 were vaccinated at the end of November, according to Zheng Zhongwei, another NHC official, that left around 50 million in that age bracket – more than the population of Spain.

Peter Wang, an epidemiology professor at Memorial University of Newfoundland in Canada, said the “relatively low” efficacy for Chinese vaccines and uncertainty of how long their protection could last would most likely make China wary of opening up soon.

Clinical trial-based efficacy readings for the two main Chinese vaccines, manufactured by Sinopharm and Sinovac, ranged between 50% and 83.5% against the symptomatic disease. That is below the 90%-plus figures for shots from Pfizer and Moderna.

Two recent studies showed antibody response from the two vaccines was weaker against Omicron than against some older versions of the virus, but it remains unclear how the variant would affect the vaccines’ overall effectiveness.

The COVID-19 policies are credited with helping the country’s industrial sector by preventing widespread factory shutdowns and keeping the export machine humming.

Booming exports, bolstered by surging demand from goods from COVID-hit and locked-down economies, drove the country’s growth in 2021, hitting double-digit growth every month so far.

However, Louis Kuijs, head of Asia economics at Oxford Economics, says the hit to consumption likely now outweighs any benefits.

Retail sales rose just 3.9% in November, well below pre-pandemic trends. The catering and hospitality sectors have been hit particularly hard.

“Nowadays the approach is a net negative for the economy,” said Kuijs, noting that other highly vaccinated countries have moved to a “living with COVID” approach that makes growth increasingly resilient to new outbreaks and variants.

Foreign firms have warned that expatriate workers are leaving amid concerns over separation from their families, foreign chambers of commerce have reported, and it is hard to get technicians or executives in to upgrade plants or cut deals.

“In a worst-case scenario we fear there may not be meaningful change until late 2022, or even into 2023,” said Joerg Wuttke, president of the European Chamber of Commerce in China.

Quarantine requirements for international arrivals vary but are typically at least two weeks and often longer. The northern city of Shenyang, for example, requires travellers to spend four weeks in quarantine and another month of “health management”, during which they are advised not to leave home unnecessarily.

On the other side of the equation, an intolerably high number of deaths could result if China loosens controls immediately without higher vaccination coverage for the elderly, said NHC’s Zheng.

China, where the pandemic first emerged in the central city of Wuhan, has officially reported just 4,636 deaths, well below many other countries and a tiny fraction of its population, and relatively few in the country of 1.41 billion have been infected.

Preparing the population for a steep rise in cases would be key when Beijing eventually pivots to opening up, said Hsu Li Yang, a infectious diseases professor at the National University of Singapore.

“You have to prepare for that once you open up, the virus would spread all over the country because it’s just almost impossible to contain it,” Hsu said, adding that transmission-slowing measures such as isolating infections from healthy people may still be necessary.

(Corrects to read two (not one), paragraph 2)