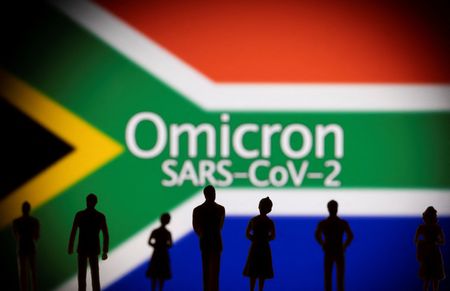 By Emma Rumney and Estelle Shirbon

JOHANNESBURG (Reuters) – COVID-19 cases appear to have peaked in South Africa’s Gauteng province about a month after the Omicron variant was first detected there and the impact of surging infections has been less severe than previous waves, scientists said on Wednesday.

Scientists from the National Institute of Communicable Diseases (NICD) said that while more study was needed, the data from South Africa – whose experience is being closely watched around the world – told a “positive story” about the variant’s severity.

Gauteng, South Africa’s commercial hub, home to one of the continent’s busiest airports and the region where Omicron first emerged, is now seeing a fall in daily cases and the percentage of positive tests, the NICD’s Michelle Groome told a news briefing.

“Really we feel that this has persisted for over a week and that we are past the peak in Gauteng,” she said.

There had been a “levelling off” in three other provinces – Limpopo, North West and Mpumalanga, she added, though cases were still increasing elsewhere.

NICD data showed that the seven-day moving average of daily cases – which the scientists say is more reliable than daily confirmed cases – was on a downward trajectory in Gauteng.

A graph showed a steep rise in cases from close to zero in mid-November to an average of 10,000 daily cases early in December. That had since fallen sharply to around 5,000 per day on average.

Groome cautioned that some of the lower case numbers could be due to lower levels of testing during the holiday period.

South Africa, now maintaining the lowest level of a five-tier system of restrictions despite a rapid surge in infections, is monitoring hospitalisation levels very closely.

While these have also risen, they have so far remained far below the levels seen during previous waves of the pandemic, with deaths also lower than seen in the past and people staying in hospital for shorter periods, the NICD’s Waasila Jassat said, warning however that relevant data tended to lag.

Infections in the first four weeks of the fourth coronavirus wave, driven by Omicron, rose well above those seen in the previous three waves, NICD data showed, but the proportion of people admitted to hospital stood at 5.7%, compared to above 13% in the other waves.

The proportion of people admitted to hospital who later died meanwhile dropped to 5.6%, compared with 19% or above in the first, second or third waves.

Some 87% of COVID-19 deaths seen in South Africa between Nov. 7 and Dec. 18 were of people who were unvaccinated or not fully vaccinated, the data showed.