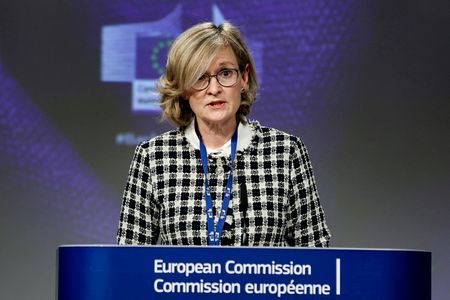 DUBLIN (Reuters) – A European Commissioner said on Sunday that British Prime Minister Boris Johnson’s refusal to compromise on Brexit was “untenable” and called on him not to let Conservative Party “machinations” determine his replacement for Brexit minister David Frost.

EU Financial Services Commissioner Mairead McGuinness, Ireland’s appointment to the European Commission, said she hoped that the Omicron variant of COVID-19 and other big issues would help nudge Britain to reciprocate on concessions made by Brussels.

The resignation on Saturday of Frost, a core architect of Johnson’s tumultuous Brexit strategy, raised questions about the future tone of the EU divorce and the immediate course of talks on Northern Ireland. It also added to a sense of turmoil in Johnson’s Conservative government.

McGuinness, who said the Commission was not given any advance warning of Frost’s resignation, speculated that Frost’s move could have been linked to an easing of British opposition to the role of the European Court of Justice.

“I would hope that the mood will be towards compromise and problem solving, not Conservative Party politics, which I’m afraid takes the eye off the real … issues, and will drag out this into next year, which is not good for Northern Ireland,” McGuinness told Irish state radio RTE.

McGuinness called on Johnson to resist pressure to choose a hardliner as Frost’s replacement.

“If the priority is simply to appease hardliners in the Conservative Party, I think we are in a very bad place,” she said.

She said the focus had to be on the issues and that it would be “alarming” if progress is dependent on the personality of the negotiator. Frost’s replacement should be “fully briefed” and begin by acknowledging the concessions made by Brussels.

“We’re entering 2022. A referendum happened in 2016. … We must focus on Northern Ireland, not the internal machinations of the Tory Party,” she said.