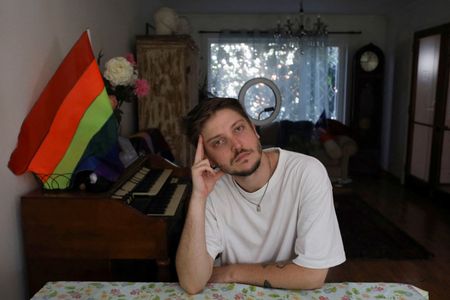 SANTIAGO (Reuters) – For Ian Harting, a 29-year-old dancer and choreographer, voting in Chile’s deeply divisive presidential election last weekend felt like a matter of life and death for him as a gay man.

The 55-year-old lawyer has opposed gay marriage, abortion and the emergency contraception “morning-after pill,” and he defended the 1973-1990 dictatorship of General Augusto Pinochet.

During the campaign, he threatened to eliminate Chile’s Women’s Ministry before backtracking amid a barrage of criticism.

“As gay man I have my partner, and I had never really been scared for my life, for my rights,” said Harting. “The presidential race in Chile was a reminder of that fear.”

Harting said Kast’s messages fueled hate in those who wanted to mistreat, marginalize and discriminate minorities.

Kast’s campaign did not respond to a request for comment.

Following his election win, Boric, who at 35 becomes Chile’s youngest democratically-elected president, spoke to a sea of supporters who lined the streets of downtown Santiago: block after block of them waving pride, feminist and the indigenous Mapuche flags.

Boric laid out broad plans to unite the nation and expand rights, mentioning indigenous rights, gender equality and the environment. He also promised fiscal responsibility and to nurture the economy.

Paola Fernandez, 39, whose daughter is homosexual, said she was afraid of Kast’s hard-right policies and conservative social agenda.

“Chile has already experienced a dictatorship and we could not live through one again,” she said, hugging her daughter.

“My father-in-law was persecuted and exiled so we couldn’t let a candidate like Jose Antonio Kast come to power.”

A native of Punta Arenas in Chile’s far south, Boric as a student led the Federation of Students at the University of Chile in Santiago. He rose to prominence organizing protests in 2011 demanding improved and cheaper education.

That was a precursor to a social uprising in 2019 that paved the way for hard-fought gains in rights and lit the fuse for the rise of the left and the redrafting of Chile’s dictatorship-era constitution.

After a decade-long legal battle, Chilean lawmakers legalized same-sex marriage this month, a milestone for a country that has long had a conservative reputation even compared with its Catholic Latin American peers.

The rallies however often devolved into clashes with police, riots and looting, which served as a rallying cry for many Chileans frustrated with the movement and was fodder for Kast’s tough law-and-order stance.

Activists interviewed by Reuters said they would continue marching to press for further progress.

“What we’ve achieved we owe to the mass struggle, to occupying public spaces, actively mobilizing,” said Pamela Valenzuela, spokesperson for the March 8 Feminist Coordinator (CF8M). “So it’s clear to us that we are going to continue mobilizing from a position of autonomy.”

The hundreds of thousands of Chilean women who hit the streets in recent years were key to achieving laws to penalize femicide, legalize abortion, and give women an equal voice in drafting the new constitution.

Chile in 2017 legalized abortion for women under conditions where their life was in danger, a fetus was unviable or when a pregnancy had resulted from rape.

But efforts to expand legal access have faced an uphill battle. In November, Chile’s Lower Chamber of Congress rejected a bill that proposed legalizing termination of pregnancy up to 14 weeks.

“The president-elect in his program expressly says it: free, legal and safe abortion,” said reproductive rights activist Gloria Maira. “It has been our feminist slogan for decades.”

Despite Boric’s promises of change, pushing through contentious policies could prove difficult with Congress evenly split between left and right after the November elections.

“President Boric’s government will not be an easy one,” said Maira.

During the campaign, Boric said Chileans who had faced discrimination would be “protagonists” of his government.

Gay rights activist Victor Hugo Robles said the appointment of an openly gay or trans minister would be a major statement.

A gesture of that magnitude would “symbolize change, freedom: revolution for the Chile of today and the Chile of the future,” he said.