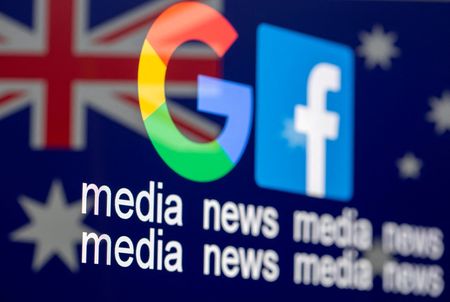 SYDNEY (Reuters) -Australia’s ground-breaking law forcing platforms like Google and Facebook to pay local publishers for news faces an unlikely test case: a website that experts say uses fake journalist profiles that has won regulatory backing for its bid to be paid.

Australia’s regulator in charge of enforcing the law, the Australian Communications and Media Authority, last month added “News Cop” – an almost-unknown site without a physical address – to the public register of companies who can negotiate licensing deals with the parents of Facebook and Google under the government system.

The move by the ACMA to clear the site through an initial vetting process intended to support local news by giving the Australian government the power to shape deals with Facebook and Google raises questions about how the still-contentious law will be implemented, several legal experts said.

News Cop features articles rewritten from other news providers. It has no physical address other than a post office box, and was registered as a company on Feb. 21, 2021, records show, three days before the content law was passed. It is the only media company on the register with no business records before 2021.

Until recently, the News Cop site credited reporters with accompanying pictures that appear to have been faked, according to two experts.

Adam Cox, named on the ACMA register as News Cop’s contact, declined to answer questions about the journalist profiles. In emails and calls with Reuters, he said that News Cop did not stand to benefit financially from being on the ACMA register and that the company made money from donations from readers.

Richard Holden, an economics professor at the University of New South Wales, said including News Cop on the register, which defines which news providers the Big Tech companies must compensate for their content, undermined the law’s intent to support public interest journalism and “shows you that these rules are easily gamed”.

“The fact that this appears to have got through the gate, at least so far, is kind of troubling,” he said.

An ACMA spokesperson said that since authorising News Cop, the agency had gone back to the company and asked “about the registered news business and its production of news source content”. The spokesperson declined to provide details of its inquiries.

Inclusion on the register does not guarantee News Cop will get payments from Facebook and Google. The office of the federal treasurer first must “designate” one of the tech giants for government intervention – in which a mediator decides what the companies must pay for content – a step it has not yet taken.

Representatives for Facebook, which changed the name of its parent entity to Meta, and Google, which is owned by Alphabet Inc, also declined to comment.

Both companies opposed the law and threatened to pull operations out of Australia, but relented when the government added steps that raised the bar for “designation.”

News Cop is not related to Rupert Murdoch’s News Corp, which secured deals with Facebook and Google before the Australian licensing regime became law. The 28 companies on ACMA’s list may secure deals if the government intervenes.

A News Corp spokesperson did not respond to Reuters calls and emails requesting comment.

Tim Graham, a misinformation researcher at Queensland University of Technology, analysed 14 photographs posted as though they were News Cop staff and found 13 “almost certainly” had been generated by AI software. Elise Thomas, an analyst with the Institute for Strategic Dialogue who specialises in online misinformation, said “most of the profile images” had a “strong chance” of having been software generated.

After Reuters inquiries, all bylines on News Cop articles were changed to Cox’s name, with journalist photographs changed to a picture of a monkey. Asked about the change, Cox said, “I have no idea, I’m sorry”.

On its website, the company says profit will be donated to charity. It also says Australia’s media law, which was passed in February, is intended “to address the power imbalance between big tech and news media organisations like ourselves.”

“If fake news organisations are appearing on the register of eligible news businesses, it is clear that more oversight is required and definitions of what can be included … need to be reviewed,” said Tanya Notley, an associate professor at University of Western Sydney and deputy chair of the Australian Media Literacy Alliance.

Other critics of the law include free-market proponents such as Holden, who say the market, not the government, should decide who is paid for their news. From the beginning, Facebook and Google opposed being forced to pay at all.

The law’s impact is being closely watched globally; France and Canada, among others, are considering similar regimes in which Big Tech pays news providers for content.

Several other established media organisations are campaigning for Facebook and Google to be pushed into mediation. If they succeed, the tech giants would be required to negotiate licensing deals with every company on the ACMA register, including News Cop.

Representatives for Treasurer Josh Frydenberg and Communications Minister Paul Fletcher, who oversees ACMA, declined to comment about News Cop’s inclusion on the register and the scope of the law.

The Australian Competition and Consumer Commission, which drafted the law at the treasurer’s request, declined to comment.