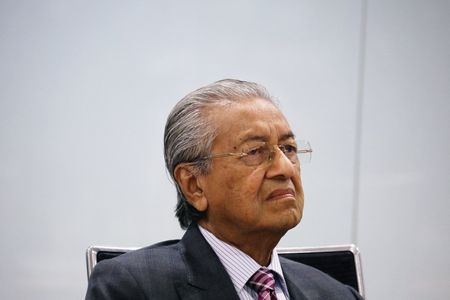 KUALA LUMPUR (Reuters) – Former Malaysian Prime Minister Mahathir Mohamad, 96, has completed all necessary investigations for a medical check-up and will be ready to be discharged from hospital within the next few days, the National Heart Institute said on Tuesday.

Mahathir, who has a history of heart troubles, was admitted to the hospital last Thursday for a full medical checkup and observation. The hospital and spokespeople for Mahathir did not say why he had been admitted.

“The team of doctors treating Dr Mahathir is satisfied with results of the investigations done over the last few days,” the institute said in a statement.

Mahathir became the Southeast Asian country’s longest-serving prime minister, during a 22-year rule from 1981 and 2003.

He then returned for a second stint in 2018 after leading an opposition alliance to a historic election win, making him the world’s oldest head of government.

His second administration, however, collapsed in less than two years due to infighting.