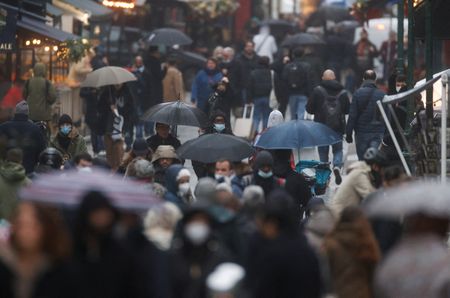 PARIS (Reuters) -Faced with the rapid spread of the Omicron variant, France will further tighten COVID-19 measures, but there will be no curfew for New Year’s Eve and schools will reopen as planned in early January, the government said on Monday.

Prime Minister Jean Castex said the COVID incidence rate – the number of infections per 100,000 people per week – is now well over 700 and at a record level since the start of the pandemic, forcing his cabinet to take new measures.

“I know that it feels like a film without ending, but a year ago we started our vaccination campaign and now we are one of the best vaccinated and best protected people in the world,” Castex told a news conference following a cabinet meeting.

In order to further boost vaccinations, the government’s planned vaccine pass – which will require proof of vaccination, not just a negative test, to enter public places – will take effect from Jan. 15, if parliament approves a draft government bill, Castex said.

The government is also narrowing the period until people are eligible for a booster shot to three months from four following their second jab.

On Saturday, France registered a new record of more than 100,000 new infections per day as people rushed to get tested before Christmas family gatherings. On Monday, the seven-day moving average of new infections stood at more than 72,000.