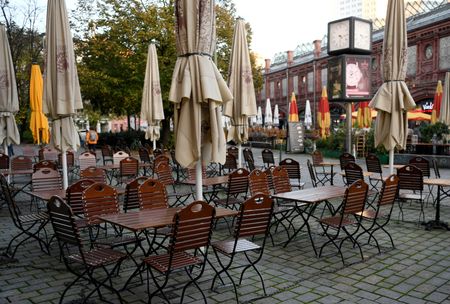 BERLIN (Reuters) -German leaders are considering tougher contact restrictions and an accelerated booster campaign among other measures after experts warned that the Omicron coronavirus variant could bring critical infrastructure to breaking point.

Chancellor Olaf Scholz said he supported the likely decision of a meeting of federal and state leaders planned for Tuesday to restrict private contacts for those who have been vaccinated, or have been infected and recovered.

Scholz, speaking in Rome, said the meeting would also focus on the continued operation of critical institutions such as hospitals, police stations and electricity providers in case of high infection numbers, as well as handing out more boosters.

According to a draft document seen by Reuters, access to restaurants, theatres and other cultural venues will remain open to the vaccinated and recovered, who will be limited to a maximum of 10 people from Dec. 28 for private gatherings.

Clubs and discos will also be closed, the document said.

The government’s scientific advisory panel said on Sunday it was necessary to further limit contact, with data so far showing boosters alone would not be enough to contain the virus’ spread.

A German Red Cross spokesperson warned of an increasingly dire situation as more emergency personnel, 90% of whom are vaccinated, become infected while intensive care units and emergency rooms are at the limits of their capacity.

“The situation is putting both physical and psychological strain on emergency service personnel,” the spokesperson said.

A report in the Bild newspaper citing government sources said on Monday all departments and all state and federal ministries have been instructed to draw up emergency plans in case workers and civil servants have to enter quarantine.

Health Minister Karl Lauterbach on Sunday ruled out a lockdown before Christmas and said he did not expect a “hard lockdown” after the holidays either.

At the same time, Lauterbach called for parliament to decide on mandatory vaccinations as soon as possible to stem the coming waves.

Some 70.3% of Germany’s total population are considered fully vaccinated, while 31.5% have received an additional booster shot, according to official figures.

In Berlin, the recommended amount of time between the second shot and a booster was shortened to three months, the senator in charge of health for Berlin, Dilek Kalayci, said.

The Robert Koch Institute infectious disease body reported 16,086 new coronavirus cases within 24 hours on Monday, the smallest rise since early November. The death toll increased by 119 on Monday, to reach a total of 108,352.