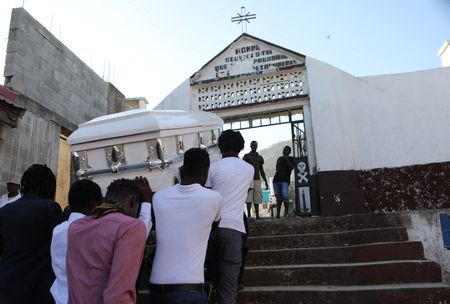 PORT-AU-PRINCE, Haiti (Reuters) – Haitians on Tuesday mourned victims of a fuel truck blast that killed 90 people last week, though many stayed home out of anger at the government amid a string of tragedies in a Caribbean nation plagued by gang violence, poverty and political turmoil.

The coffins of several of the victims, some draped in Haitian flags and flowers, were carried by firefighters through the streets to a church in Cap-Haitien, the country’s second-largest city, where the explosion took place.

The death toll from the accident soared to 90 in little over a week as authorities pieced through the rubble, identifying the charred remains of many still missing following the massive blast. Others have since died in the hospital.

Residents facing chronic fuel shortages had flocked to the truck after it tipped over a week ago, hoping to extract fuel from it. Instead, the truck exploded, engulfing them and neighborhood homes in flames, officials said.

Residents interviewed by Reuters who attended the funeral said the government had not done enough for those who lost loved ones or their homes following the explosion, providing little support or relief.

“The government shouldn’t treat us like this,” said mourner Charite Jean, who lost 15 relatives in the blaze. “Where is the international community?”

Guylaine Charles, a neighborhood resident who lost seven of her children in the explosion, held a separate funeral in protest of the state’s treatment.

She told Reuters she’d been unable to find the remains of five of them after they were swept into a mass grave.

“The Haitian state came with … loaders and picked them all up. They threw them away without any conditions, without even the chance to identify our loved ones,” she told Reuters.

The accident has cemented among some Haitians a sense of a societal crisis that has stirred anger against the government.

Kidnappings and violence have soared this year, added to the still-unsolved assassination of President Jovenel Moise in July. Weeks later, a devastating earthquake https://www.reuters.com/business/environment/magnitude-7-quake-strikes-western-haiti-usgs-2021-08-14 killed more than 2,000 people.

Fuel supplies in Haiti were severely limited in October and November after a coalition of gangs blocked transport trucks from accessing fuel port terminals in a bid to force the resignation of the interim prime minister, Ariel Henry. The gangs last month lifted the blockade, but Haitians continue struggling to obtain gasoline and diesel.

(Reporting by Gessika Thomas in Port-au-Prince and Reuters TV in Cap-Haitien, writing by Dave Sherwood)