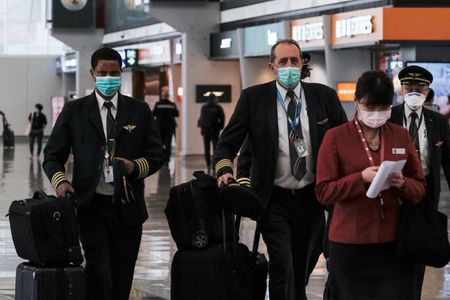 The global financial hub has identified several dozen Omicron infections via regular testing during quarantine but neither Omicron, nor other variants, have spread into the community in recent months.

But some of the new infections with Omicron were detected among air crew, who had only been required to quarantine at home, unlike most other people returning to the city, who have to quarantine in hotels.

The new measures require that returning air cargo crew spend three days in hotel quarantine before a period of home isolation. Most recent infections of air crew staff have been discovered in the first three days.

“We expect most cases in the future to be of the new Omicron variant,” said Edwin Tsui, controller of the Centre for Health Protection. “We have a very high community outbreak risk. A single spark can start a fifth wave.”

Vaccination rates in Hong Kong are lagging those in many similar cities with less than 70% of the eligible population having received two doses of either China’s Sinovac or Germany’s BioNTech vaccines.

This month, authorities demanded that all government workplaces ensure that all eligible staff are vaccinated by mid-February.

The South China Morning Post newspaper reported on Tuesday, citing unidentified sources, that the measure may soon be extended to schools.

Hong Kong has followed Beijing’s lead and implemented some of the world’s strictest travel restrictions, hoping China, its main source of economic growth, would allow some cross-border movement.

Most non-residents are banned from travelling to the city and authorities demand mandatory hotel quarantine of up to 21 days for arrivals from most countries at the expense of the travellers.