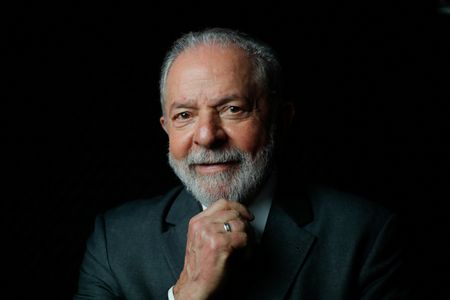 SAO PAULO (Reuters) – Brazil’s former President Luiz Inacio Lula da Silva, who is currently leading in the polls ahead of next year’s election, said if reelected he would seek to build a broad range of alliances in a bid to unite a deeply polarized country.

In an interview on Friday, the 76-year-old former union leader promised to more fairly distribute wealth under a Workers Party government, and stressed the need to get rich Brazilians to pay more tax.

He also vowed to regain Brazil’s international credibility, damaged by President Jair Bolsonaro. A South American trade deal with the European Union would be a priority, he said, as would strengthening ties with the United States and China.

“I don’t want to fight: I want to join forces so we can build,” he said at the Workers Party offices in downtown Sao Paulo.

It marks quite the reversal.

Just over two years ago he was in prison convicted of corruption, and until eight months ago he was banned from running for Brazil’s top job.

With those convictions annulled by the Supreme Court, the former leftist leader is back in the running. While there is a long way to go until the October presidential elections – and Lula has yet to officially declare his candidacy – current polls show. Bolsonaro, widely criticized for his handling of the pandemic, is a distant second with 21%.

“A resurrection,” Lula called it.

Lula governed Brazil from 2003 until 2010 and oversaw a period of dramatic economic growth – driven by a commodity boom – that helped lift millions out of poverty.

Under his government, deforestation in the Amazon rainforest fell and Brazil emerged as a global force. He left office with approval ratings of around 80%.

Polls suggest the memory of those years is selling well.

But today’s reality, despite some parallels, is markedly different. Brazil’s political spectrum is far more polarized, the pandemic has killed over 600,000 people and thrown many more into poverty.

As the world reopens, inflationary pressures have become a global problem, not just a Brazilian one – and harder to fix as a result. Environmentally, South America’s largest country has become a pariah.

Lula said he would reestablish Brazil as a regional and global player.

“Together with the European Union, we (South America) could form an economic bloc, a bloc with similar political positions, with similar environmental views, to face up to the two giants… the United States and China,” he said.

On the economy, he called for a council of 100 people, taken from all sections of society, to help form economic and social policy.

He said he would like to see the inheritance tax, which is around 4% in Brazil, brought closer to European levels of about 50%.

But, for Lula, more money in the hands of the poor helps to grow the consumer base, creating a bigger market for companies to sell their goods. He dismissed investor concerns of a future Lula government. “I will offer you a market,” he said.

Although many Brazilians remember Lula’s presidency fondly, the years that followed soured the Workers Party legacy.

Under his successor, Dilma Rousseff, the economy first slowed, then fell off a cliff. As the party’s political star fell, Rousseff lost support in Congress and was impeached. Prosecutors uncovered a massive corruption scheme.

“If there was (graft in my government), we created the whole apparatus that investigated corruption,” he said, referencing investment in police intelligence, the passing of transparency laws and the autonomy of public prosecutors.

Analysts had expected a resurgent Lula to stoke support for Bolsonaro. But that has not yet materialized.

Instead the pandemic, rising poverty and inflation have dented the president’s popularity.

Lula has been careful not to help his rival too, presenting himself as peacemaker with little of the fiery rhetoric for which he became known as a union boss.

As part of that strategy, sources close to Lula say he is considering ex-rival Geraldo Alckmin as a centrist running mate.

A four-term former governor of business powerhouse Sao Paulo, Alckmin is an unlikely partner but one brimming with market credibility.

Lula said no decision had been taken but was full of praise for the man who ran against him for the presidency in 2006. “Alckmin is a very important political figure,” he said.

About his own future, Lula was more forthright. “I’m back in the game. I want to play, and I want to win.”