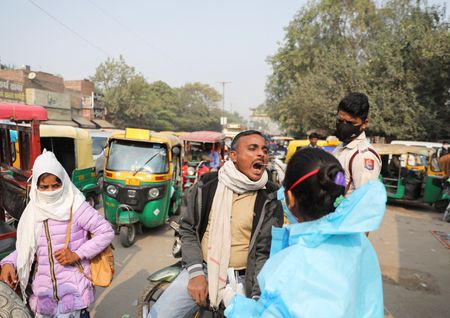 By Neha Arora and Shilpa Jamkhandikar

NEW DELHI (Reuters) – India has recorded 200 cases of the Omicron coronavirus variant across 12 states, mostly in the western state of Maharashtra and the nation’s capital New Delhi, the health ministry said on Tuesday.

The country’s tally of Omicron cases has nearly doubled within a week, but there have been no deaths reported so far. In less than 40% of cases, patients either fully recovered or were discharged, the data showed.

India has been accelerating its vaccination campaign amid fears of potential surges in infections, with at least one dose given to 87% of the eligible 944 million adults.

India recorded 5,326 new COVID-19 infections in the past 24 hours, the lowest overnight tally in more than one and a half years. Overall, the country has reported 34.75 million cases, the second-highest behind only the United States.

“We are keeping an eye on the variant and in coming days, we will monitor its effects,” Mandaviya said.

Delhi Chief Minister Arvind Kejriwal urged citizens to wear masks and appealed to the federal government to allow booster doses. Delhi had fully vaccinated about 70% of its adult population of 15 million, Kejriwal said.