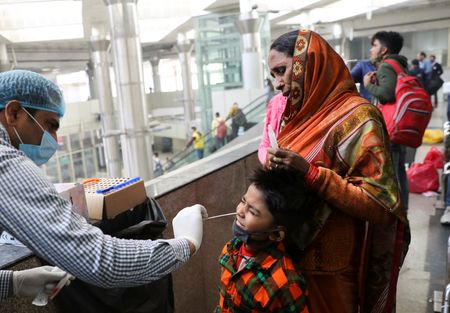 By Neha Arora and Aftab Ahmed

NEW DELHI (Reuters) – India’s capital New Delhi on Wednesday banned Christmas and other celebrations ahead of New Year to contain a possible surge in the Omicron coronavirus variant, as the city reported the country’s highest number of cases along with Maharashtra state.

Over the past 24 hours, India’s Omicron tally increased to 213, with 13 more cases across 15 states. Maharashtra, a western state where Omicron cases have been rising, also advised people to avoid gatherings.

India has reported no deaths from the variant so far. Its health minister has said most known cases are asymptomatic.

“No cultural event/gatherings/congregation (can) take place for celebrating Christmas or New Year in national capital territory of Delhi,” the Delhi Disaster Management Authority said in its circular issued on Wednesday.

The authority, whose writ covers a sprawling city of 20 million people, added that there had been a persistent rise in COVID-19 cases in the last few days. “It is need of hour…to control the spread of COVID-19 cases including Omicron variant.”

Late on Tuesday, the health ministry urged states to prepare for potential infection surges and gave them the green light to impose restrictions on crowds and large gatherings and marriages and offices.

The Delhi government also imposed a limit of 50% seating capacity in restaurants and capped the number of people permitted at weddings to 200, the circular said.

The Indian government has not yet decided whether to offer booster shots to citizens despite calls to do so from some states and medical experts.

India’s tally of daily new COVID-19 infections has halved within the last month and the government is racing to inoculate all of its 944 million adults. It has administered at least one vaccine shot to about 87% of the eligible population.

Some 6,317 new COVID-19 cases were recorded in the latest 24-hour period. The overall tally has reached 34.76 million, the second highest globally behind only the United States.

“Definitely not the time to drop (our) guard or be complacent as the threat is looming large,” Rijo John, a health economist at the Rajagiri College of Social Sciences in the southern city of Kochi, said on Twitter.