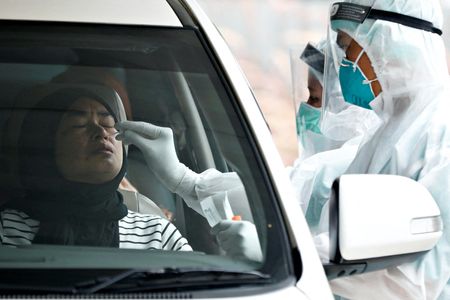 The first confirmed case was a 37-year-old male who was from the city of Medan and had visited a restaurant in Jakarta’s central business district earlier this month, Tarmizi told a news conference.

The man had no recent history of overseas travel or contacts with international travellers, Tarmizi said, adding he was asymptomatic and was in isolation at a Jakarta hospital, after he had initially isolated at home.

“With this one local transmission we will toughen mobility restrictions, especially during the Christmas and New Year’s holidays,” she said, adding the patient’s wife had tested negative for Omicron.

Earlier this month, President Joko Widodo urged people to stick to health protocols after authorities said that an employee at an isolation hospital in Jakarta had tested positive for the variant.

Health authorities say that there have been 47 confirmed cases of Omicron in Indonesia, mostly imported cases of the variant, which experts say in initial studies appears to be more contagious but less virulent than previous variants.

Indonesia, which is the world’s fourth most populous country, has suffered one of the worst coronavirus outbreaks in Asia with over 4.2 million infections and 144,000 deaths.

But after cases peaked in July due to the spread of the highly transmissible Delta variant, infections have fallen sharply in Indonesia, and remained low.