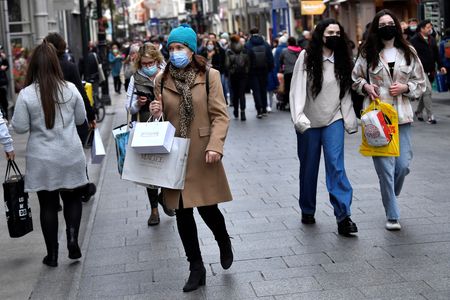 DUBLIN (Reuters) – Ireland on Friday reported its highest number of daily COVID-19 cases since the pandemic began but those requiring critical care fell further amid a rapid rollout of booster vaccines to battle a surge of the dominant Omicron variant.

The health department reported 11,182 positive cases, topping the 8,248 on January 8 during the country’s deadliest wave. The number of COVID-19 patients in hospital peaked at 2,020 in mid-January, with a barely manageable 221 requiring critical care.

There are currently 393 coronavirus patients in hospital, 89 of whom were in intensive care. Admissions have almost halved over the last month following an increase through October and November that prompted the government to tighten restrictions.

Ministers went further last week, ordering bars and restaurants to close at 8 p.m. and reducing the capacity in all public events to try to curb the spread of Omicron and protect its hospitals from a fresh surge.

The fast-spreading variant accounts for almost three quarters of all new daily cases, the health department estimated on Thursday.

Authorities in one of Europe’s most vaccinated country’s have also significantly stepped up their booster campaign and have covered just over half of all adults after vaccines were given out a record pace in successive days this week.

Ireland has reported 5,890 COVID-19 related deaths among its 5 million population, including 55 in the past week.