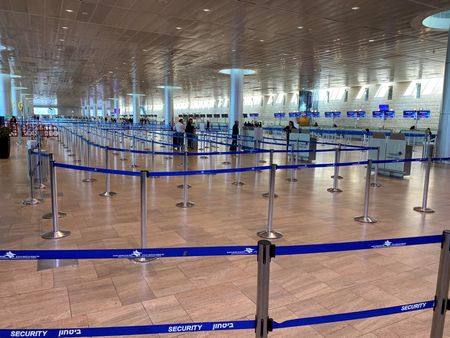 JERUSALEM (Reuters) -Israel on Monday added the United States to its “no-fly” list, citing concerns over the spread of the COVID-19 Omicron variant.

Under the edict, which goes into effect at 2200 GMT on Tuesday, Israelis would need special permission to fly to the United States, now one of more than 50 countries to which its citizens cannot travel.

In a televised address on Sunday, Prime Minister Naftali Bennett said Israel had bought some time by moving fast to limit travel when Omicron was first detected last month, but that this was now waning. He predicted a surge of sicknesses within a few weeks.

Israel has logged 134 confirmed Omicron cases and another 307 suspected cases, the Health Ministry said. Of these, 167 were symptomatic, it said.

In a rapid first response to Omicron, which was first detected in southern Africa and Hong Kong, Israel banned the entry of foreigners on Nov. 25 and has imposed three- to 14-day quarantine orders for Israelis returning from abroad.