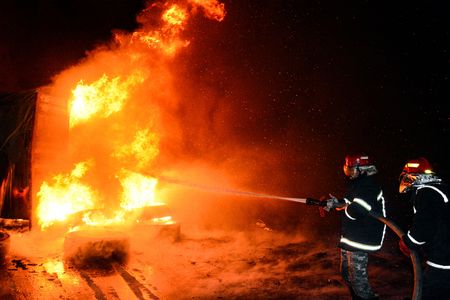 AMMAN (Reuters) -Israel launched an air strike on Syria’s main port of Latakia on Tuesday in the second such attack this month, the Syrian army said, setting ablaze the container storage area where two port sources said Iran has been storing munitions.

Official Syrian reports made no mention of any casualties. A source familiar with the operations of the port said the strike hit a container area where large consignments of Iranian munitions that had arrived last month were stored.

“These blasts and huge fires were caused by the explosions from the munitions stored in a warehouse close to commercial cargo,” the source who requested anonymity due to the sensitivity of the matter told Reuters.

Syrian state news agency SANA quoted the head of the Latakia fire brigade as saying the containers targeted in the strike contained oils and spare parts for machines and cars.

Israel has mounted frequent attacks against what it says are Iranian targets in Syria, where Tehran-backed forces led by Lebanon’s Hezbollah have deployed over the last decade in support of President Bashar al-Assad in Syria’s civil war.

Israeli Defence Minister Benny Gantz, visiting an Israeli air-force base did not speak about the specific incident on Tuesday but warned his country would not allow Iran to use Syria to threaten Israel.

“I call upon the region’s countries to stop Iran from violating their sovereignty and people. Israel will not allow Iran to funnel balance-breaching weapons to its proxies and threaten our citizens,” Gantz said.

Another Syrian source familiar with Iranian military movements in Syria said Tehran had in recent months transferred weapons by sea as it sought to dodge intensified Israeli strikes that struck eastern Syria near a weapons supply corridor along the border with Iraq.

The drone strikes disabled several large weapons convoys sent by Tehran from Iraq, he added in information confirmed by a Western intelligence source.

Iran has expanded its military presence in Syria in recent years where it now has a foothold in most state-controlled areas where thousands of its militias and local paramilitary groups are under its command, Western intelligence sources say.

Citing a military source, SANA said Israel had carried out the air strike targeting the container storage area at 3.21 a.m. (0121 GMT), causing a fire and leading to “big material damages”.

Fire fighters were working to extinguish the blaze, it quoted the head of the Latakia fire brigade as saying. Syrian state TV footage showed flames and smoke in the container area.

Citing its correspondent, state-run broadcaster al-Ikhbariya said a number of residential buildings, a hospital and a number of shops and tourist facilities had been damaged by the power of the blasts.

Russia, which has been Assad’s most powerful ally during the war, operates an air base at Hmeimim some 20 kms (12 miles) away from Latakia.