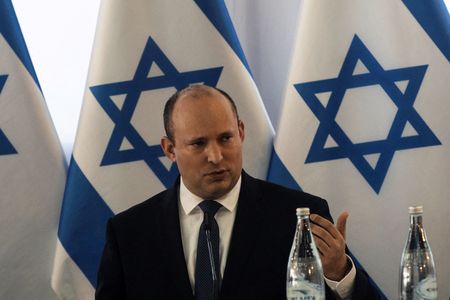 JERUSALEM (Reuters) -Prime Minister Naftali Bennett said on Tuesday that Israel would not automatically oppose a nuclear deal with Iran but world powers must take a firmer position.

“We are not the bear who said ‘no’,” Bennett said in an interview with Israel’s Army Radio, referring to a popular naysaying character from children’s literature.

“For sure there can be a good agreement. For sure. We know the parameters. Is that expected to happen now in the current dynamics? No. Because there needs to be a much firmer position,” he said.

“Iran is negotiating with a very weak hand. But unfortunately the world is acting like Iran is at a strong point.”

Bennett declined to comment on Israel’s military strike capabilities against Iran, saying he preferred the approach of “speak little and do a lot”.

On Monday, Iran and the United States resumed indirect talks https://www.reuters.com/markets/commodities/irans-oil-exports-are-focus-vienna-nuclear-talks-top-diplomat-says-2021-12-27 in Vienna on salvaging the 2015 Iran nuclear deal with Iran focused on one side of the original bargain, lifting sanctions against it, despite what critics see as scant progress on reining in its atomic activities.