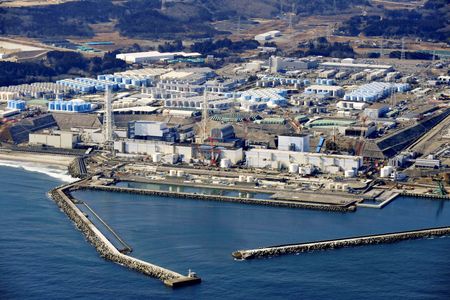 TOKYO (Reuters) – Japan’s government on Tuesday mapped out a plan for releasing contaminated water from the crippled Fukushima nuclear plant into the sea, including compensation standards for local industry and the compilation of a safety assessment report.

Japan said in April it would discharge more than 1 million tonnes of contaminated water in stages after treatment and dilution, starting around spring 2023. The announcement provoked concerns from local fishermen and objections from neighbouring China and South Korea.

Earlier this month, the plant’s operator Tokyo Electric Power (Tepco) outlined detailed plans for the disposal, including building an underwater tunnel to release the water.

Under the government scheme, Japan aims to set standards for compensation for damage caused by what it described as harmful rumours on local industries such as fishing, tourism and agriculture, while reinforcing monitoring capability and transparency to avoid reputational damage.

Japan also expects the International Atomic Energy Agency (IAEA) to compile an interim safety assessment next year, based on its review over the safety of the treated water, competence of local analytical laboratories and regulatory frameworks, it said.

In an effort to improve transparency to gain the trust of the international community, Japan asked the IAEA in April to conduct a review to assess and advise on the handling of the water.

A decade after a massive earthquake and tsunami ravaged the country’s northeastern coast, disabling the plant and causing the world’s worst nuclear disaster since Chernobyl, nearly 1.3 million tonnes of contaminated water has accumulated at the site.

The water, enough to fill about 500 Olympic-sized swimming pools, is stored in huge tanks at an annual cost of about 100 billion yen ($870 million), and space is running out.

Japan has argued the release is necessary to press ahead with the complex decommissioning of the plant. It says similarly filtered water is routinely released from nuclear plants around the world.