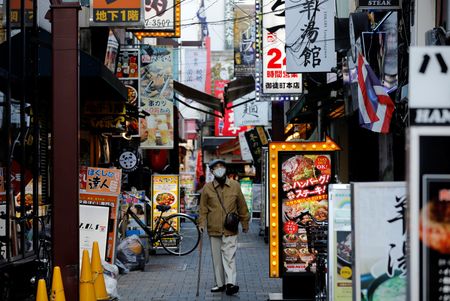 TOKYO (Reuters) -Japan’s government is not considering an immediate change to current COVID-19 restrictions, Chief Cabinet Secretary Hirokazu Matsuno said on Thursday, a day after community transmission of the Omicron variant was discovered in the country.

The government confirmed on Wednesday that a family of three based in the western city of Osaka were infected by the Omicron variant and the origin of how they had caught the virus could not be traced.

And on Thursday, the governor of neighboring Kyoto prefecture said that a community infection was confirmed in a woman in her 20s, with authorities investigating seven of her close contacts.

The government has started preparations to expand free testing to people who don’t have COVID-19 symptoms in an attempt to prevent the spread of the Omicron variant, news agency Jiji reported on Thursday citing unnamed government sources.

Shigeru Omi, the nation’s top health advisor, urged caution before people travel or gather with family and friends during the holiday season.

“Now that the Omicron strain has been confirmed as a community-acquired infection, there are concerns that it may spread further, so please be cautious when holding year-end or New Year’s parties,” he told reporters.