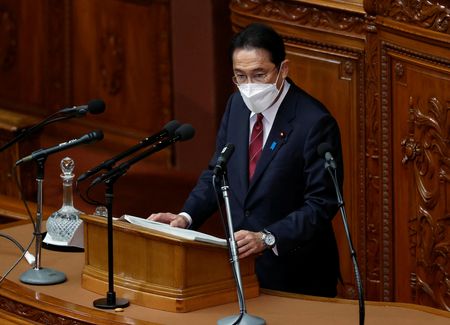 By Tetsushi Kajimoto and Kiyoshi Takenaka

TOKYO (Reuters) -Japanese Prime Minister Fumio Kishida on Tuesday called on shareholders to recognise the importance of raising wages, making a clear push to address one of the chronic ailments of the world’s no.3 economy: low pay.

Kishida also told a news conference that he would compile a policy package on Dec. 27 to allow small firms to pass on the cost wage hikes, adding it was important to take every possible step to encourage companies to raise wages.

After years of deflation, Japanese companies are wary of hiking prices for fear of losing customers and market share. Instead, they have typically turned to belt-tightening to keep costs down, leaving them with razor-thin margins and employees with flat pay.

Kishida, who has called for a “new capitalism”, has made low wages one of his biggest points and called for a redistribution of wealth.

“Paying an appropriate salary provides the foundation of creation of sustainable corporate value. We need to make large shareholders of a company understand this point,” Kishida said.

Kishida was speaking a day after parliament approved the first extra budget of the 2021 fiscal year, with record spending of $317 billion.

The 36 trillion yen ($317 billion) budget earmarks funds for tackling COVID-19, including to secure vaccines and drugs, while it also features cash payouts for families with children and funds for the promotion of tourism.

He said Japan’s COVID-19 border controls, some of the strictest in the world, would remain in place for the time being.

Kishida also said he would make arrangements so that Pfizer’s coronavirus oral drugs would be available early next year.