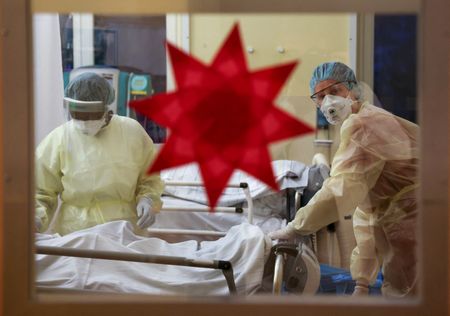 (Reuters) – The upcoming New Year’s Eve will mark the second anniversary of the first reported COVID-19 case in Wuhan, China. Since then, more than 272 million cases of the disease have been reported worldwide and over 5 million people have died of COVID-19.

To combat the health crisis, countries around the globe have administered more than 8.5 billion doses of COVID-19 vaccine and drugmakers have developed new treatments.

Here are some of the key moments of the COVID-19 pandemic from the past two years:

The Wuhan Municipal Health Commission, China, reported a cluster of pneumonia cases in Wuhan, the capital city of the Hubei Province.

The World Health Organization (WHO) said Chinese authorities have determined the outbreak was caused by a novel coronavirus. Soon after, Thailand reported the first confirmed case of the coronavirus outside China.

China on Jan. 23 announced a lockdown in Wuhan, and at month-end the WHO declared the coronavirus outbreak a “public health emergency of international concern.”

The WHO named the novel coronavirus SARS-COV2, an acronym for severe acute respiratory syndrome coronavirus 2. It named the disease caused by the virus as COVID-19, an abbreviation for Coronavirus Disease 2019.

The WHO described the coronavirus outbreak as a pandemic for the first time.

Italy’s Lombardy region became the single deadliest coronavirus hotspot on the planet, with more than 3,000 deaths that eclipsed those in China’s Hubei.

“The whole of Italy is closed now,” read a headline in the Corriere della Sera newspaper after Rome imposed the most severe controls on a Western nation since World War II.

On March 13, the United States declared the pandemic a national emergency to free up $50 billion in federal aid. Later that month, California became the first U.S. state to issue a “stay-at-home order”, while New York closed non-essential businesses.

India announced a nationwide lockdown on March 24, the same day when the 2020 Summer Olympics in Japan were postponed.

COVID-19 infections crossed 1 million and the WHO reported evidence that transmission from an infected person could occur before symptoms showed.

Death toll from COVID-19 crossed 1 million, less than a year after the virus was discovered in China.

On Oct. 1, then-U.S. President Donald Trump tested positive for COVID-19, a little more than a month before the presidential election.

Pfizer and German partner BioNTech said their experimental COVID-19 shot was more than 90% effective in preventing the disease, the first successful interim data on a COVID-19 vaccine from a large-scale clinical test.

Moderna Inc became the second U.S. company to demonstrate success of its COVID-19 vaccine, reporting that its shot was 94.5% effective in preventing the disease.

Britain approved Pfizer’s COVID-19 vaccine for emergency use, making it the first country in the world https://reut.rs/3GIK91q to begin mass inoculations against the coronavirus.

On Dec. 11, the United States authorized the Pfizer-BioNTech shot for emergency use for people aged 16 and older as deaths from COVID-19 in the country neared 300,000.

The WHO classified the P.1 variant, first found in Brazil in November 2020, as “variant of concern” following a surge in cases and deaths in the country. It was later named the Gamma variant.

The WHO declared the B.1.617.2 variant, first detected in India, as “variant of concern” at a global level. The variant fuelled a second wave of infections in the country, driving daily cases above 300,000 and crippling India’s healthcare infrastructure.

The WHO later named the variant as Delta.

Israel the became first in the world to step up efforts against the Delta variant by rolling out booster shots of the Pfizer-BioNTech COVID-19 vaccine for those aged over 60.

The U.S. FDA authorized a third dose of the Pfizer-BioNTech and Moderna COVID-19 vaccines for immunocompromised individuals.

U.S. regulators cleared booster shots of Pfizer’s vaccine for those 65 and older, all people at high risk of severe disease and others who are regularly exposed to the virus.

The United States authorized Moderna vaccine boosters for some sections of its population and boosters from Johnson & Johnson for individuals 18 years and above. It also backed the use of a different shot from the original inoculation as a booster.

On Nov.4, Britain became the first country in the world to approve an oral COVID-19 antiviral pill jointly developed by Merck & Co Inc and Ridgeback Biotherapeutics.

The United States expanded eligibility for booster shots to all adults, even as the WHO voiced concerns about equitable supply of shots globally.

(Reporting by Leroy Leo and Amruta Khandekar in Bengaluru; Editing by Ankur Banerjee and Aditya Soni)