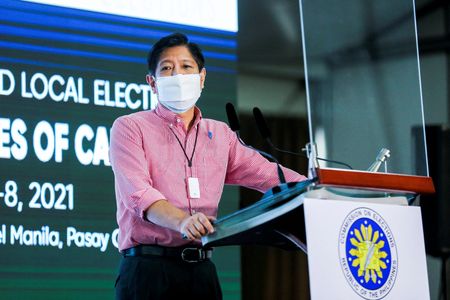 MANILA (Reuters) – The son of late Philippine dictator Ferdinand Marcos has emerged as the clear favourite for next year’s presidential election, taking more than a 20-point lead over his closest rival in a poll published on Wednesday.

Ferdinand Marcos Jr topped the Pulse Asia Survey of 2,400 respondents with 53% of votes, while his running mate, Sara Duterte-Carpio, the daughter of President Rodrigo Duterte, topped a separate poll for vice president with 45%.

The election to choose a successor to Duterte, who is barred by the constitution from seeking re-election, is on May 9.

The Marcos family is among the country’s most famous dynasties and despite its fall from grace, it has retained powerful political connections and steadfast support in its stronghold of Ilocos Norte province.

Working to the advantage of Marcos, analysts say, is his strong social media presence aimed at the youth, who make up half of eligible voters who were not born when Marcos senior was in power.

Marcos’ level support in the poll was a record for a presidential candidate since Pulse Asia started polling. Before Marcos, the record was held by Benigno Aquino III, who got 45% in a December 2009 survey, and eventually won the 2010 presidential contest.

But an early lead in opinion polls does not guarantee a win, said political analyst Ramon Casiple, as he recalled how Duterte, a late entry into the 2016 presidential race, only started topping surveys a month before the May election.

Several groups have sought to bar Marcos from the presidential race because of a near three-decade old tax evasion conviction. Marcos’s spokesperson branded such efforts as propaganda.