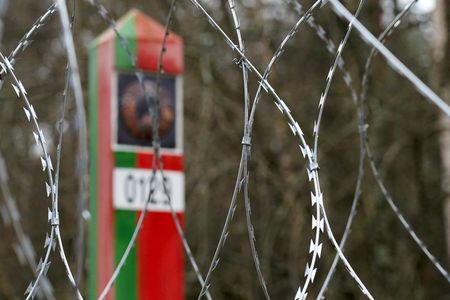 (Reuters) – Migrants who cross into Lithuania from Belarus can be detained for up to a year, the Lithuanian parliament decided on Thursday, increasing an initial six-month detention limit.

Eighty-one lawmakers backed the lengthening of the six-month detention period, which was introduced in July https://www.reuters.com/world/europe/lithuanian-parliament-votes-allow-mass-detention-asylum-seekers-2021-07-13 as part of plans to hold large numbers of migrants in camps near the border and deter others from trying to cross into the country. Fourteen lawmakers opposed the extension, while 15 abstained.

“We have to send a message to migrants and Europe,” Interior Minister Agne Bilotaite told parliament. “Migrants haven’t flooded Europe, and Europe is grateful to us.”

About 4,300 migrants have entered Lithuania from Belarus this year, with Iraqi citizens accounting for two-thirds of the total, according to Lithuanian interior ministry data. More than 3,000 people are currently held in migrant camps, the ministry said.

Since early August, Lithuania has pushed more than 7,000 people back over the border, which runs along sparsely populated woods and marshes. The number of migrants trying to cross from Belarus has decreased in recent weeks, but Lithuania has said it could soon be facing a new wave.

Last month, thousands of migrants were stuck on the European Union’s eastern frontiers. The EU has accused Minsk of engineering the situation by flying migrants into Belarus and pushing them to cross the borders.