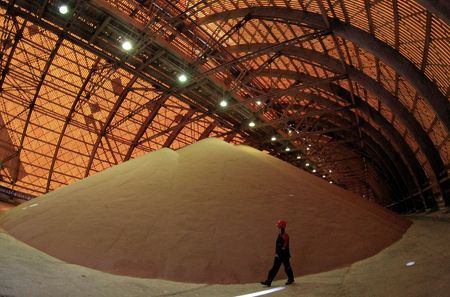 VILNIUS (Reuters) – A Lithuanian government commission said on Tuesday an agreement signed by the state-run railway in 2018 to transport potash from sanctions-hit Belarus goes against national security interests, opening the door for the government to terminate it.

State-owned potash producer Belaruskali was sanctioned by the United States in August, one year after a crackdown following a disputed presidential election which President Alexander Lukashenko said he won.

The ban on sales of potash took effect on Dec. 8 after a four-month wind-down period, but potash continues to be transported via Lithuania.

The continuation of the deal caused a public outcry in Lithuania, one of Europe’s most vocal critics of human rights abuses in Belarus and a U.S. ally, forcing Prime Minister Ingrida Simonyte to consider resigning, although she announced last week she would stay in her post.

The head of Lithuanian Railways (LTG), Mantas Bartuska, agreed to step down to “de-escalate” the situation.

The commission has been tasked since 2018 to rule on any agreements made by the country’s strategically important enterprises, including the LTG, that are worth at least a tenth of their revenue.

Landlocked Belarus uses Lithuania’s Klaipeda port to export potash from Belaruskali, one of the world’s largest producers of the crop nutrient, which is Minsk’s main foreign currency earner.

Bartuska said earlier that the U.S. sanctions did not affect the transportation contract with Belaruskali, and if LTG terminated it without legal grounds, it could face international arbitration and fines that could bankrupt it.

The commission’s ruling on the 2018 agreement and its 2021 amendment now gives the government power to terminate it, stopping the potash transport.

(Reporting by Andrius Sytas in Vilnius; Editing by Sonya Hepinstall)