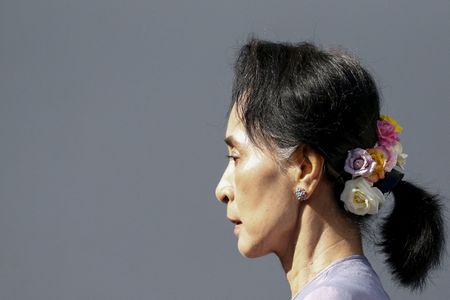 (Reuters) -A court in military-ruled Myanmar has postponed verdicts it was expected to make in two cases in the trial of ousted leader Aung San Suu Kyi to Jan. 10, according to a source familiar with the proceedings.

The court had been due to rule on charges on Monday that included the possession of unlicensed walkie-talkies, the second of nearly a dozen cases against Suu Kyi that carry a combined sentence of more than 100 years in prison. She denies all charges.

Supporters of Nobel laureate Suu Kyi, 76, say the cases against her are baseless and designed to end once and for all the challenge she poses to the military’s grip on power.

The daughter of the hero of Myanmar’s independence from Britain, Suu Kyi led a civilian government until it was ousted and she was detained in a Feb. 1 military coup.

She is already serving a two-year sentence at an undisclosed location after being found guilty on Dec. 7 on charges of incitement and breaching coronavirus restrictions.

Suu Kyi spent years under house arrest for her opposition to military rule but was freed in 2010 and led her National League for Democracy to a landslide victory in a 2015 election.

Her party won again in November last year but the military said the vote was rigged and seized power weeks later. The election commission at the time dismissed the military’s complaint.

Myanmar has been in turmoil since the coup with hundreds of people killed in protests and fighting against the army.