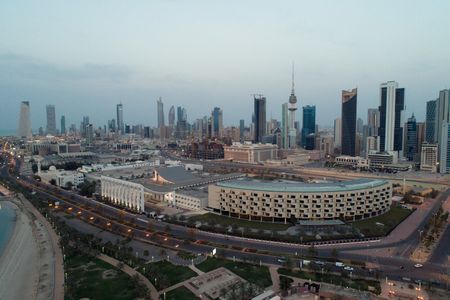 KUWAIT (Reuters) – Kuwait formed a new cabinet on Tuesday with a new finance minister and including three opposition lawmakers following a standoff between previous governments and the parliament.

The new health minister is Khaled Al-Saeed, whose predecessor had steered Kuwait through the COVID-19 pandemic.

This is the Gulf state’s third cabinet this year after the previous governments resigned in the standoff that had hindered state efforts for fiscal reform.

The government has tried to temporarily boost finances while more structural and fiscal reforms remain deadlocked, including a debt law to tap international markets.

State media said Emir Sheikh Nawaf Al-Ahmad Al-Sabah, who had taken steps to defuse the standoff, approved the cabinet despite having handed over most constitutional duties in November to the crown prince, who issued the decree on the cabinet formation.

OPEC member Kuwait bans political parties but has given its legislature more influence than similar bodies in other Gulf monarchies, including the power to pass and block laws, question ministers and submit no-confidence votes against senior government officials.

The cabinet has only one woman minister. It includes three opposition MPs and one pro-government lawmaker, in a departure from past governments that normally included only one MP.

The opposition parliamentarians were given the information, social affairs and National Assembly affairs portfolios.

“The government is trying to dismantle the opposition front…by including some parliamentarians in the government formation,” Kuwaiti political analyst Mohammed Al-Dosari said.

He said several opposition members are still seeking the departure of the prime minister and the parliament speaker.