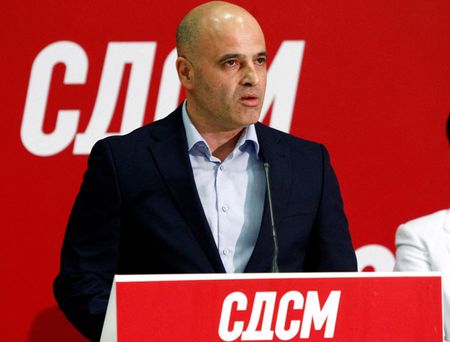 SARAJEVO (Reuters) -Dimitar Kovacevski, the new leader of North Macedonia’s ruling Socialists, said on Tuesday that he had been confirmed by his party as the country’s prime minister-designate following Zoran Zaev’s formal resignation as premier last week.

Kovacevski said on his Facebook page that the central committee of his ruling SDSM party had endorsed him as prime minister-designate late on Monday, and that in that capacity he met a U.S. ambassador in North Macedonia on Tuesday.

“As the SDSM president and new prime minister-designate, I will be led exclusively by principles of unity, responsibility, dedication and efficiency,” Kovacevski said after the meeting.

The future government of the country faces challenges ranging from the COVID-19 pandemic to an energy crisis caused by a lack of domestic electricity production and price hikes across Europe. North Macedonia, which joined NATO last year, is also striving to become part of the European Union.

Under the constitution, Kovacevski should form a new cabinet which has the backing of 64 deputies in the 120-seat parliament within 20 days. Parliamentary Speaker Talat Xhaferi said that a vote for a new government would be probably scheduled for Jan. 15 or 16, local media reported.