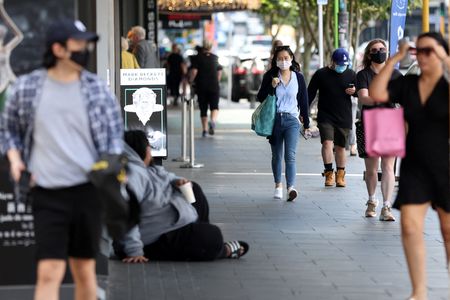 WELLINGTON (Reuters) -New Zealand on Tuesday postponed its phased border re-opening plans until the end of February over concerns of the rapid global spread of the Omicron variant of the coronavirus.

The South Pacific nation had just started easing some of the world’s toughest pandemic measures and its international border restrictions were to progressively loosen from January, with all foreign tourists allowed into the country from April.

Non-quarantine travel, which was to have opened for New Zealanders in Australia from Jan. 16, would be pushed back until the end of February, COVID-19 Response Minister Chris Hipkins said at a press conference in Wellington.

“All of the evidence so far points to Omicron being the most transmissible COVID-19 variant yet.

“There’s no doubt this is disappointing and will upset many holiday plans, but it’s important to set these changes out clearly today so they can have time to consider those plans.”

The measures were a precaution as it was still unclear how sick Omicron makes people and the impact it had on health systems was not yet fully understood, he said.

New Zealand also said the length of stay in state quarantine facilities would be increased from a week to 10 days. The pre-departure test requirement to enter New Zealand was reduced from 72 hours to 48 hours before travel.

National airline Air New Zealand said it would cancel around 120 services through to the end of February due to the re-opening plans being pushed back, affecting about 27,000 customers.

Prime Minister Jacinda Ardern said the decisions were taken to give the government more time to prepare for Omicron.

“It’s unfortunately not a case of if (it spreads in New Zealand) but when … it’s so easily spread. So we are doing everything we can to maker sure we are prepared,” Ardern said on Facebook Live.

The Omicron variant was first detected last month in southern Africa and Hong Kong and has spread with lightening speed to at least 89 countries so far.

New Zealand has reported 22 cases with the Omicron variant but all at the border quarantine facilities and there’s been no commuinity cases yet.