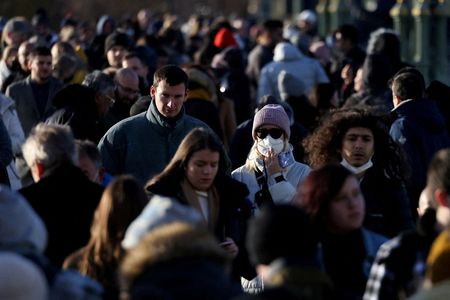 (Reuters) – The following is a summary of some recent studies on COVID-19. They include research that warrants further study to corroborate the findings and that has yet to be certified by peer review.

Omicron infections no less severe based on early UK data

Infections caused by the Omicron variant of the coronavirus do not appear to be less severe than infections from Delta, according to early data from the UK.

Researchers at Imperial College London compared 11,329 people with confirmed or likely Omicron infections with nearly 200,000 people infected with other variants. So far, according to a report issued ahead of peer review and updated on Monday, they see “no evidence of Omicron having lower severity than Delta, judged by either the proportion of people testing positive who report symptoms, or by the proportion of cases seeking hospital care after infection.”

For vaccines available in the UK, effectiveness against symptomatic Omicron infection ranged from 0% to 20% after two doses, and from 55% to 80% following a booster dose. The report also estimated that after taking individual risk factors into account, the odds of reinfection with Omicron are 5.4 times greater than for reinfection with Delta. A study of healthcare workers in the pre-Omicron era estimated that a prior SARS-CoV-2 infection afforded 85% protection against a second infection over 6 months, the researchers said, while “the protection against reinfection by Omicron afforded by past infection may be as low as 19%.”

Sperm count, motility may be low for months after COVID-19

Sperm quality is impaired for months for some people after recovery from COVID-19, researchers have found.

The semen itself was not infectious, the researchers found. But among 35 men who provided samples within a month after recovery from symptomatic infection, reductions in sperm motility were evident in 60% and sperm counts were reduced in 37%. As reported on Monday in Fertility and Sterility, semen samples were obtained from 120 Belgian men with an average age of 35 years, at an average of 52 days after their COVID-19 symptoms had resolved. Among 51 men tested between one and two months after recovery, 37% had reduced sperm motility and 29% had low sperm counts. Among 34 men who provided semen samples at least two months after recovery, sperm motility was impaired in 28% and sperm counts were low in 6%. The severity of COVID-19 infection was not correlated with sperm characteristics.

“Couples with a desire for pregnancy should be warned that sperm quality after COVID-19 infection can be suboptimal,” the researchers concluded. “The estimated recovery time is 3 months, but further follow-up studies are under way to confirm this and to determine if permanent damage occurred in a minority of men.”

Neutralizing molecule could be cheaper than antibodies

An experimental molecule that neutralizes the coronavirus in the same way antibodies do would be cheaper and easier to manufacture, researchers said.

The molecule belongs to a class of compounds known as aptamers. Because they are made from RNA or DNA, aptamers are easier to synthesize than protein-based antibodies that can only be produced in living cells, said Julian Valero of Aarhus University in Denmark. Like antibodies, the aptamers attach themselves to protein targets – in this case, the spike protein on the virus surface – by folding into a three-dimensional conformation. A study published in PNAS shows that in test tube experiments, the aptamer binds tightly to the coronavirus spike, preventing it from breaking into human cells. It inhibits earlier variants of the virus, including Delta, the researchers said. They are planning tests to see whether it also recognizes and binds to Omicron.

Use of the aptamer in patients is still far off, with tests in mice only recently begun. In terms of use in humans, “we’re much closer” to being able to use the aptamer to help diagnose SARS-CoV-2 infections, said Jorgen Kjemsa, also of Aarhus University. Experiments comparing the use of the aptamer to antibodies in widely used rapid COVID-19 tests for infection are underway, he said.

Click for a Reuters graphic https://tmsnrt.rs/3c7R3Bl on vaccines in development.