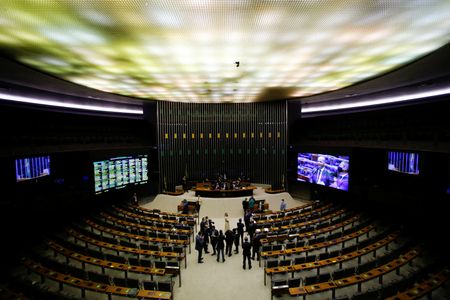 SAO PAULO (Reuters) – Over 300 Brazilian senior officials have resigned from their posts over budget cuts to the country’s tax and customs agency, one of the agency’s unions said on Wednesday, amid anger over President Jair Bolsonaro’s decision to grant police pay rises.

The cuts to Brazil’s tax agency, known as the Receita Federal, were enshrined in the government’s 2022 budget, which was approved by Congress on Tuesday night. The budget allots 1.7 billion reais ($300 million) in pay rises to Brazil’s police, one of Bolsonaro’s key constituents ahead of next year’s presidential election.

On Wednesday, in the wake of the budget approval, at least 324 senior Receita Federal auditors stepped away from their leadership roles, the Sindifisco union said in a statement. Although the officials will remain with the agency, there may now be as many as 500 unfilled senior posts across Brazil, Sindifisco said.

The union said the funds cut from the Receita Federal budget were being reallocated toward police, while its members were not receiving a bonus they had been due.

“Adding insult to injury, the Receita Federal’s own resources will be cut to satisfy the readjustments agreed with the police, in a demonstration of absolute disrespect to the tax administration,” the union said in its statement.

“It is no longer our burden to sustain a budget built to our disadvantage,” it added.

The mass departure of so many auditors could pose tax or customs headaches for Brazil’s government during the busy Christmas period. It also represents a high-profile rebuke of Bolsonaro’s politically sensitive budget by federal public servants ahead of what is likely to be tense election year.

Bolsonaro, a far-right former army captain, is currently behind in polls as he grapples with fast-rising inflation and anger over his handling of the country’s coronavirus outbreak.

He has previously, without evidence, cast doubts on the credibility of the electoral process. Critics and political analysts have expressed fears that his support base among police could pose a problem for a democratic transition if Bolsonaro chose not to accept any election loss.