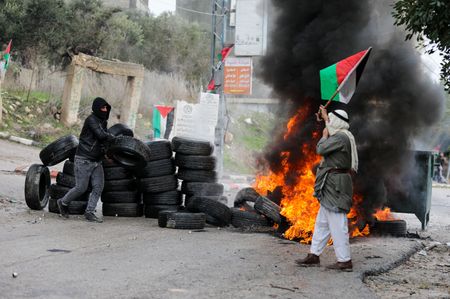 RAMALLAH, West Bank (Reuters) – Israeli forces shot dead a Palestinian in a car they were pursuing in the occupied West Bank on Wednesday, Palestinian paramedics said. The Israeli military said troops shot a Palestinian who had fired at them from a vehicle.

The incident followed several Palestinian attacks on Israelis in recent weeks. Palestinians also complain of attacks by Israeli settlers, whose residence in the West Bank the international community considers illegal.

In a statement, the military said the soldiers had come under fire from a passing vehicle while searching for Palestinians spotted approaching the Jewish settlement of Psagot.

“The troops responded with fire and hit the assailant,” the military said, adding that none of the soldiers was hurt in the incident.

Palestinian medics said the troops had chased a car up to the entrance of a refugee camp and then opened fire, wounding the Palestinian man in the back. They said he was taken to a hospital, where he was pronounced dead.

The medics said they did not know whether he had taken part in the alleged attack on the Israeli troops.

The violence came a day after Israeli soldiers shot dead a Palestinian motorist they suspected of attempting to drive his vehicle into a military checkpoint near the settlement of Mevo Dotan in the West Bank.

Tor Wennesland, the United Nations Mideast peace envoy, last week said he was “alarmed” by the recent escalation of violence on both sides, saying the situation had become “volatile.”