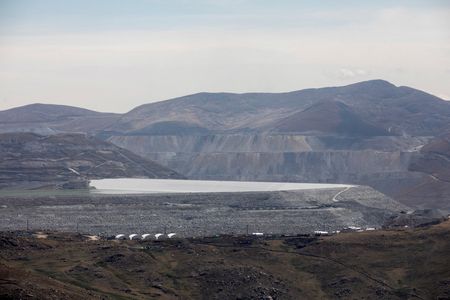 By Marco Aquino and Marcelo Rochabrun

LIMA (Reuters) -A Peruvian community blocking a road used by MMG Ltd’s Las Bambas copper mine will attend a government-brokered meeting set for Tuesday, a representative said, backtracking from a previous decision to boycott it.

“In order to stop people from demonizing the communities as uncompromising, it’s been decided to attend the meeting,” said Victor Villa, a legal adviser for residents of Chumbivilcas, whose month-long blockade forced Las Bambas to suspend production last week.

Las Bambas said earlier on Monday it does not plan to initiate legal action against Peru “for the time being” over the blockade. The mining sector has previously called on the government to send law enforcement to remove the blockade.

The meeting is the government’s latest attempt to defuse the situation without resorting to a state of emergency, which would suspend civil liberties.

The current blockade has been in place since Nov. 20 by residents of the Chumbivilcas province who complain that the mineral wealth of the mine simply bypasses them and want the company to provide more jobs and money for the area.

The government had tried to broker a meeting between the parties last week, but Villa called the available proposal “a joke” and did not attend.

Peru is the world’s no. 2 copper producer and Las Bambas accounts for 2% of world copper supply.

Las Bambas’ vice president of legal affairs, Claudio Caceres, said that company representatives were planning to attend the government-convened meeting on Tuesday with the Chumbivilcas communities.

“Currently we’re mainly committed to being able to restart a constructive and real dialogue, at the moment we’re not thinking of taking legal action,” Caceres said in an interview with local radio station RPP.

The Chinese-owned mine has been a flashpoint of protests since it began operations in 2016.

(Reporting by Marco Aquino and Marcelo Rochabrun in LimaWriting by Anthony EspositoEditing by Bernadette Baum, Matthew Lewis and Sam Holmes)