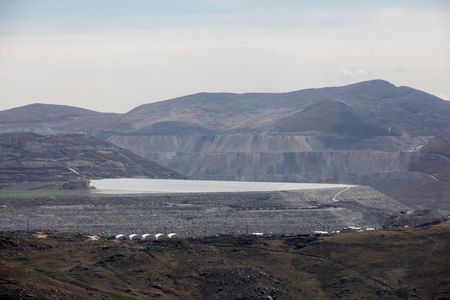 LIMA (Reuters) – Peruvian community protesters who have blocked a key road used by MMG Ltd’s Las Bambas copper mine will clear the route until at least Dec. 30, but it is uncertain if the firm will restart operations based on the truce announced Wednesday.

Las Bambas declined to comment on the decision but has said in the past its operations can only be guaranteed if the road is cleared in an indefinite fashion.

The decision to unblock the road was confirmed to Reuters by Victor Villa, an adviser to the protesting Chumbivilcas provinces. On Wednesday, the government confirmed several communities had agreed to lift the blockade, but said some were still mulling the decision.

The blockade, which has been in place for over a month, snarled production at the mine, which produces some 2% of global copper output, and created a major issue for the government of leftist President Pedro Castillo.

“We are going to give them a truce, today in the afternoon we are going to release the statement that we are going to clear the road until the 30th of this month,” said Victor Villa, an advisor to the protesting Chumbivilcas community.

“We need to be cautious,” Villa said of the temporary truce, noting that politicians have made offers to the area previously but failed to deliver.

He said that it is possible the road could remain clear after Dec. 30, but it would depend on agreements reached during a planned visit to the area by Prime Minister Mirtha Vasquez.

The Las Bambas mine has been a flashpoint for protests, with blockades hitting the road on and off for over 400 days since the mine started operations in 2016.

On Tuesday, Vasquez strongly urged protesting communities to clear the road but was vague about the consequences of not doing so. She has not ruled out a state of emergency declaration but said she would rather engage in dialogue.