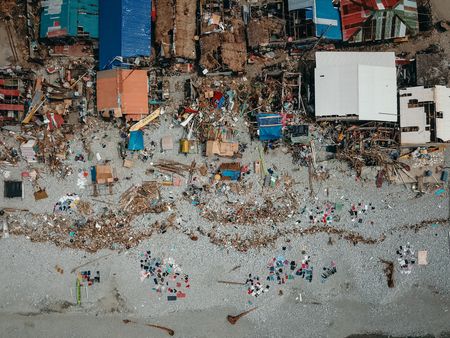 SINGAPORE (Reuters) – The rapid intensification that turned this week’s Typhoon Rai into the strongest storm to hit the Philippines this year surpassed all predictions, forecasters said, leaving nearly 400 people dead and almost a million displaced.

While it’s unclear exactly how global warming is affecting the intensification of such storms, the UN’s climate change agency has found it is “likely that the frequency of rapid intensification events have increased over the past four decades” as temperatures rise.

Before Rai underwent a process of rapid intensification, forecasters at first warned of a storm that could bring “considerable damage”, with winds of up to 165 kilometres (103 miles) per hour.

“But the situation evolved very fast,” said Nikos Peñaranda, a forecaster who studies thunderstorms at the Philippines’ national weather bureau, speaking on Tuesday. “Our models weren’t able to predict the way the storm intensified, and it exceeded all our predictions.”

In rapid intensification of storms, warm ocean water and differing wind speeds near the eye of the storm act as fuel to whip it up into a more severe event. In the case of Rai, the storm turned into a category 5 supertyphoon, with speeds similar to when a passenger airplane starts to lift off the ground.

When it made landfall, winds of up to 210 km/hr were uprooting coconut trees, ripping down electricity poles, and hurling slabs of corrugated tin and wood through the air.

A lack of real-time data and case studies of similar storms in the region made it difficult for forecasters to predict just how much Rai, or Odette as the storm is known locally, would intensify, said Peñaranda.

“The challenge in forecasting rapidly intensifying events is just that the speed with which this occurs, often in a matter of hours, leaves less time for disaster risk reduction mobilisation and evacuations,” said Clare Nullis, media officer specializing in climate change at the World Meteorological Organisation (WMO).

Hurricane Ida, a category 4 storm, experienced a similar intensification in the Gulf of Mexico hours before it slammed into the U.S. state of Louisiana in August.

Ocean temperatures near the surface and at depths of up to 200 metres are rising around three times faster in this region than the global average, according to the WMO, making it fertile ground for more intense, less predictable storms.

In the past three decades, the Philippines has recorded at least 205 tropical cyclones, the highest of any Asian country, according to EM-DAT, a publicly available database on disasters run by the University of Louvain. Nearly each one of has taken lives and caused millions of dollars worth of damage.

By comparison, China, the second-most affected country, has seen 139, and Bangladesh, also prone to storms, has seen 42.