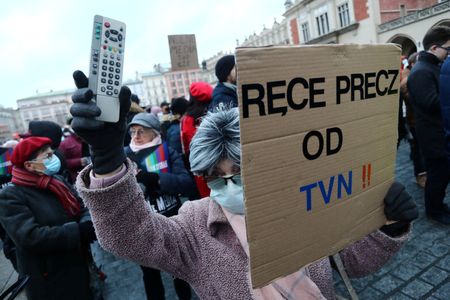 By Pawel Florkiewicz and Alan Charlish

WARSAW (Reuters) -Poles on Sunday staged nationwide protests including a thousands-strong rally outside the presidential palace to demand the head of state veto a law they say would limit media freedoms in the European Union’s largest eastern member.

Unexpectedly rushed through parliament on Friday, the legislation would tighten rules around foreign ownership of media, specifically affecting the ability of news channel TVN24, owned by U.S. media company Discovery Inc, to operate.

The bill, yet to be signed into law by President Andrzej Duda, has soured ties between NATO-member state Poland and the United States at a time of heightened tension in eastern Europe amid what some countries see as increased Russian assertiveness.

It has also fuelled wider fears about attacks on media freedoms that have been running high since state-run oil company PKN Orlen said last year it was taking over a German-owned publisher of regional newspapers.

“This is not just about one channel,” Warsaw mayor and former opposition candidate for president Rafal Trzaskowski told the crowd. “In a moment (there will be) censorship of the internet, an attempt to extinguish all independent sources of information – but we will not allow that to happen.”

“We have to be here today because free media are a pillar of democracy,” said Beata Laciak, a member of the crowd and a sociology professor.

Demonstrations took place across the country. Pictures from the southern city of Krakow showed protesters brandishing banners with slogans like “Hands off TVN” and “Free Poland, Free People, Free Media”.

As of 1920 GMT, more than 1.5 million people had signed a petition in TVN24’s defence, the channel said.

The ruling Law and Justice (PiS) party has long said that foreign media groups have too much power in the country and distort public debate.

Critics say the moves against foreign media groups are part of an increasingly authoritarian agenda that has put Warsaw at loggerheads with Brussels over LGBT rights and judicial reforms.