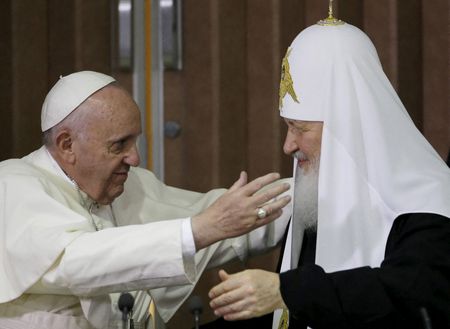 VATICAN CITY (Reuters) – Pope Francis and a senior leader of the Russian Orthodox Church held talks on Wednesday to discuss plans for a second meeting between the pontiff and Russian Patriarch Kirill.

Francis and Metropolitan Hilarion Alfeyev, head of external relations for the Russian Orthodox Church, met for about an hour to discuss the possible date and place, among other issues.

The meeting between Francis and Kirill in Cuba in 2016 was the first by a pope and a leader of the Russian Orthodox Church since the great schism that split Christianity into Eastern and Western branches in 1054.

Hilarion told Russia’s RIA news agency that he hoped their next meeting would be next year and that he and the pope discussed possible dates and places but that nothing had been set in stone.

Pope Francis said this month that he was willing to go anywhere, including Moscow, for his next meeting with Kirill so they could discuss things “brother to brother”.

The Eastern and Western Churches have declared a willingness to work towards unity but they are still far apart theologically and over what role a pope would play in an eventually reunited Church.