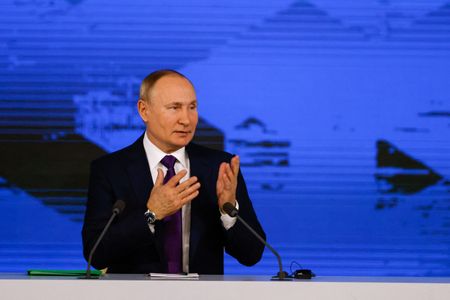 Putin spoke in Russian. The quotes below were translated into English by Reuters.

ON POSSIBLE CONFLICT WITH UKRAINE

“This is not our choice, we do not want this.”

“We have to think about ensuring our security prospects not just for today and next week but for the near future.”

“We just directly posed the question that there should be no further NATO movement to the east, the ball is in their court, they should answer us with something. In this regard, I would like to stress that on the whole we have seen a positive reaction so far, our American partners tell us that they are ready to start this discussion.”

“The course of negotiations is not important to us, the result is important… ‘Not one inch to the East,’ they told us in the 90s. So what? They cheated, just brazenly tricked us! Five waves of NATO expansion and now already, please, the systems are appearing in Romania and Poland.”

“Gazprom is supplying all volumes requested under existing contracts.”

“Gazprom did not book this traffic as its customers, above all German and French companies, who buy gas via this route, did not put purchase requests forward.”

“They turned this route into reverse from Germany to Poland… Why? Because we supply gas to Germany under long-term contracts and the price is three to four, (even) six to seven times cheaper than on spot. Just reselling 1 billion cubic metres one can earn $1 billion.”

ON RUSSIA LABELLING SOME MEDIA AS FOREIGN AGENTS

“We do not forbid the work of these organisations. We want organisations engaging in Russia’s domestic political activity to clearly and concisely declare the sources of foreign funding for their work.”

“…I am talking about the need for mutual recognition of vaccines and for these vaccines to be spread around the world as quickly as possible in as large a quantity as possible. Otherwise we will not be able to cope with this problem globally, humanity will live with it all the time.”

“I know the real (economy) sector’s dissatisfaction with raising rates, but if this is not done, we could have the same problem Turkey has. This is a serious issue and a serious challenge.”

“The unemployment rate has become lower, by the end of the year it may slightly increase to 4.4%. This is a very good indicator of the economy as a whole.”

“Collective immunity today in Russia is 59.4%… But this is not enough, we need collective immunity of around 80%. Hopefully, next year, somewhere at least by the end of the first quarter or in the second quarter, we will reach this level.”