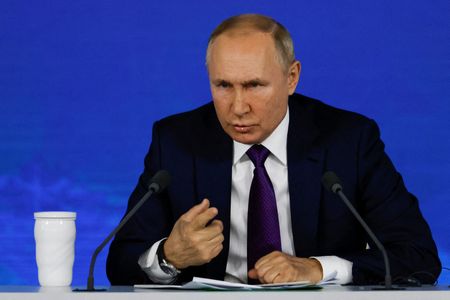 MOSCOW (Reuters) -Russia wants to avoid conflict with Ukraine and the West, President Vladimir Putin said on Thursday, but needs an “immediate” response from the United States and its allies to its demands for security guarantees.

Ukraine is at the centre of soaring East-West tensions after the United States and Kyiv accused Russia of weighing a new attack on its southern neighbour, an allegation Moscow denies.

Putin was plied with questions about the risk of conflict with Ukraine during his marathon annual news conference, which lasted over four hours.

“This is not our (preferred) choice, we do not want this,” he told reporters.

Tensions over Ukraine have pushed Moscow’s relations with the West to their lowest point since the collapse of the Soviet Union some 30 years ago.

The United States, the European Union and the Group of Seven have all warned Putin he will face “massive consequences” including tough economic sanctions in the event of any new Russian aggression.

Putin said Russia had received a generally positive initial response to security proposals it handed to the United States this month designed to defuse the crisis and that he was hopeful about the prospect for negotiations, which he said would start early next year in Geneva.

But in a separate reply, Putin grew more heated when recalling how NATO had “brazenly tricked” Russia with successive waves of expansion since the Cold War, and said Moscow needed an answer urgently.

“You must give us guarantees, and immediately – now,” he said.

A Biden administration official in a call with reporters said Washington has taken note of the concerns that Moscow has raised and was ready to engage with Russia as soon as early January but a specific date and location were yet to be set.

Speaking on condition of anonymity, the administration official repeatedly said the United States would not negotiate publicly and that it would provide its full response to Russian proposals in January.

“I expect we will have our substantive response in those (January) talks…. clearly there are some things that have been proposed that we’ll never agree to. I think the Russians probably know that on some level. I think there are other areas where we may be able to explore what’s possible,” the official said.

Russia rejects Ukrainian and U.S. accusations that it may bepreparing an invasion of Ukraine as early as next month by tensof thousands of Russian troops deployed within reach of theborder of the country which like Russia is a former Soviet republic. It says it needs pledges from the West – including a promisenot to conduct NATO military activity in Eastern Europe -because its security is threatened by Ukraine’s growing tieswith the Western alliance as well as the possibility of NATO missiles being deployed against it on Ukrainian territory.

“We just directly posed the question that there should be no further NATO movement to the east. The ball is in their court, they should answer us with something,” Putin said.

Putin accused Ukraine of breaking its commitments under a 2015 deal meant to halt fighting in its eastern Donbass area between Ukrainian and pro-Russian forces, and refusing to talk to representatives of two breakaway regions there.

Ukraine’s foreign ministry said Kyiv, on the contrary, had done “titanic work” to bring about a new ceasefire agreement in the east on Wednesday. The Ukrainian military reported, however, that the “armed formations of the Russian Federation” had violated the latest truce three times in the course of Thursday, including with mortars and heavy grenade launchers.

There were no casualties from those incidents, it said.

Four sources have told Reuters that Russian mercenaries have deployed to separatist-controlled eastern Ukraine in recent weeks to bolster defences against Ukrainian forces.

Swedish Foreign Minister Ann Linde, chair of the Organisation for Security and Cooperation in Europe (OSCE) which has a monitoring mission in the conflict zone, called the ceasefire a “small but important first step towards de-escalation along the contact line”.

The Biden administration official also welcomed the move, but called it a “small step.”

“It’s possible that in case of escalation (in Ukraine), or, if we see that Belarus could be finally occupied (by Russia), extra NATO troops could be deployed in Lithuania.” he told

Rupsys said Belarus armed forces were no longer operating independently, while the country’s air defence system had been fully integrated with Russian one, and Belarus could be “fully occupied” in the near future.

Ukraine rejects Putin’s stance that Moscow is just a mediator in the conflict, accusing it of providing direct backing to the separatist side. It has repeatedly offered direct talks with Russia, which Moscow has so far rejected.

Putin made clear he did not see President Volodymr Zelenskiy as a negotiating partner, accusing him of falling under the influence of what he called radical nationalist forces.

“How can I build a relationship with the current leadership, given what they are doing? It’s practically impossible,” he said.

Many of Russia’s security proposals, which would require the withdrawal of U.S. and allied forces from central and eastern European countries that joined NATO after 1997, are seen as non-starters in the West.

But the United States and NATO have said they will discuss the package with Russia early next year, aware that outright rejection could further inflame the crisis over Ukraine.