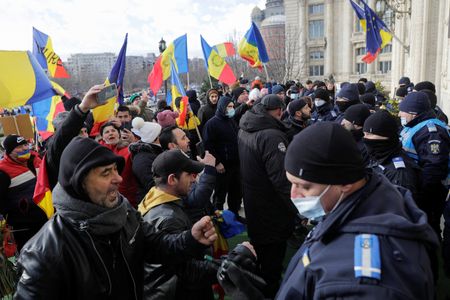 BUCHAREST (Reuters) – Romanian protesters tried to force their way into parliament on Tuesday, blocking traffic and vandalising some cars in the capital Bucharest in an attempt to prevent lawmakers from making a COVID-19 health pass mandatory for workers.

Riot police were caught off guard when hundreds of protesters poured in through a yard gate, spray painting cars and forcing security staff to block the building’s entryways. The protesters later left. Police did not use force.

While the ruling coalition of centrists and leftists is currently negotiating the terms of a health pass mandate, no such bill is on parliament’s legislative agenda at the moment.

An estimated 2,000-2,500 people from across the country gathered outside parliament in the morning waving Romanian flags and chanting “Freedom,” in a protest organised by the opposition ultra-nationalist Alliance for Uniting Romanians (AUR).

In October, Romanian senators narrowly rejected a bill requiring medical staff, public sector workers and those of large privately-owned firms to carry a COVID-19 health pass which was aimed at boosting vaccine uptake.

The coalition government is negotiating a new bill which would require most workers to show they are either vaccinated, have recovered from the virus or have a recent negative test, but have yet to agree on who pays for testing and for how long.

Romania is the European Union’s second-least vaccinated state, with roughly 40% of the population inoculated amid distrust in state institutions and poor vaccine education. At the height of the fourth wave in late October, Romania topped global lists of new coronavirus deaths per million.