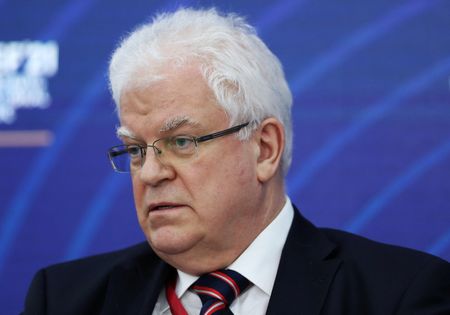 BERLIN (Reuters) – Russia is not preparing a military invasion of Ukraine, its ambassador to the European Union was quoted as saying on Thursday, after Moscow unnerved the West with a massive troop build-up on its territory close to the Ukrainian border.

Vladimir Chizhov told German newspaper Die Welt in an interview that Russia wanted to support Russian-speaking people and compatriots living in other countries, but he added that Moscow never said it wanted to use military means for this.

“Russia is not planning an attack against any country. I can assure you that no Russian troops are currently preparing for an invasion of Ukraine,” Chizhov was quoted as saying.

Russian President Vladimir Putin said on Tuesday that Russia had no room to retreat in a standoff with the United States over Ukraine and would be forced into a tough response unless the West dropped its “aggressive line”.

Putin addressed his remarks to military officials as Russia pressed for an urgent U.S. and NATO reply to proposals it made last week for a binding set of security guarantees from the West.