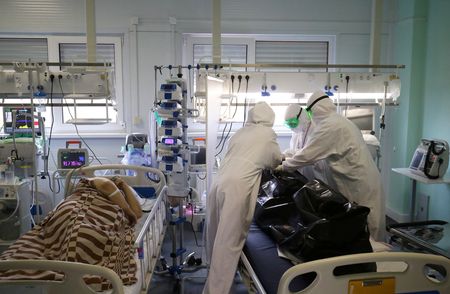 MOSCOW (Reuters) – Russia’s coronavirus death toll passed the 600,000 mark on Thursday, Reuters calculations based on official data showed, after a surge of infections linked to the Delta variant.

Russia had the third highest toll in the world with 600,434 fatalities, behind the United States which has recorded around 813,000 deaths and Brazil with 618,000.

The Omicron variant which is spreading fast in other countries has so far made little impact on the Russian data. Officials said this week they had detected only 41 cases.

The calculations were based on figures from the Rosstat statistics service up to the end of October, and data from the Russian coronavirus task force for November and December.

Rosstat figures usually exceed those given in daily updates by the coronavirus task force. It has yet to publish figures beyond October.

Authorities say the discrepancy between the two sets of data is down to the fact that the task force daily reports obvious cases, whereas Rosstat publishes fully confirmed data on a monthly basis.

The Russian coronavirus task force reported 1,002 deaths and 25,667 new infections in the past 24 hours.