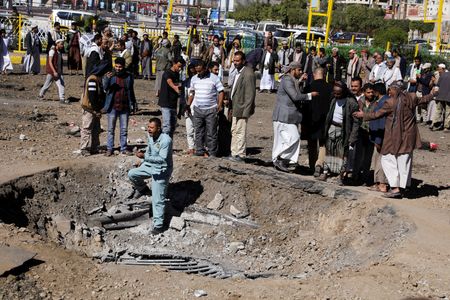 DUBAI (Reuters) -The Saudi-led coalition fighting in Yemen said it launched air strikes against a military camp in the capital Sanaa on Thursday, attacks which the Iran-aligned Houthis said hit a prison compound and a hospital.

The coalition said it destroyed seven drone and weapons stores at the camp, Saudi state TV reported, adding it was in response to an armed drone launched from north Yemen towards Saudi’s Red Sea region of Jizan.

The Houthis said in a statement bombs fell on a prison hosting more than 3,000 coalition fighters that were captured in battles. The statement said the strikes caused panic and fear among prisoners.

The Yemeni capital is held by the Houthi movement. The group has been battling the coalition, which backs Yemen’s internationally-recognised government, for seven years.

Houthi-run Masirah TV also said the strikes had hit the Sabaeen neighbourhood of Sanaa in the early hours, damaging some civilian homes and causing some damage to a maternity and children’s hospital.

The coalition did not immediately respond to a request for comment on the claims that a prison and hospital had been hit.

During the conflict, which has killed tens of thousands and displaced millions, the Saudi-led coalition has launched thousands of air strikes inside Yemen that also hit markets, schools and hospitals. Houthi forces have regularly sent drones and fired missiles into Saudi Arabian cities.

The coalition said it carried out the operation in accordance with international humanitarian law.