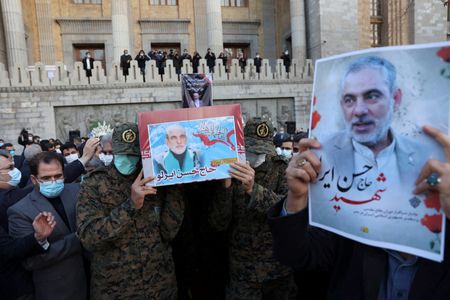 DUBAI (Reuters) – The Saudi-led coalition fighting in Yemen said on Wednesday it had helped get Iran’s sick ambassador out of the country before he died, rejecting an Iranian accusation that the envoy’s evacuation had been delayed.

Iran said on Tuesday said Hasan Irlu, Iran’s ambassador to Houthi-run north Yemen, had died of COVID-19 after his evacuation from Yemen, suggesting Saudi Arabia delayed his departure from the capital, Sanaa.

The coalition, which has been fighting the Iran-aligned Houthi movement since early 2015, said in a statement it had facilitated Irlu’s repatriation and had arranged for an Iraqi medical plane to fly him from Sanaa to Basra in Iraq.

It said it began facilitating Irlu’s transfer from Sanaa on humanitarian grounds, in light of mediation from Oman and Iraq, within 48 hours of being informed of his health condition.

The coalition did not say in the statement what medical condition Irlu had been suffering from.

Saudi Arabia and Iran, the region’s Sunni Muslim and Shi’ite powerhouses, are bitter rivals but they launched direct talks this year as global powers try to salvage a nuclear pact with Iran and as U.N.-led efforts to end the Yemen war have stalled.

Last December, the U.S. Treasury blacklisted Irlu and described him as an official of Iran’s elite Quds Force, the overseas arm of Iran’s Revolutionary Guards and a pillar of Iranian efforts to project power in Yemen, Syria and elsewhere.

Two Yemeni political sources and a foreign source have said Irlu had recently kept a low profile due to illness and political tension.

The Saudi-led coalition intervened in Yemen in 2015 against the Houthis after the movement ousted the internationally recognised government from Sanaa.