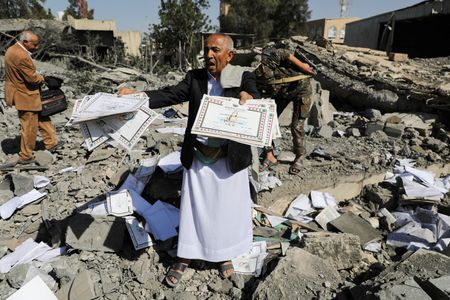 (Reuters) -The Saudi-led coalition fighting in Yemen on Monday said it carried out air strikes on what it called military targets at Yemen’s Sanaa international airport, from where drone strikes have been launched against Saudi targets.

The Yemeni capital is held by the Iran-aligned Houthi movement, which has been battling the coalition for seven years.

During the conflict, which has killed tens of thousands and displaced millions, Houthi forces have sent drones and fired missiles into Saudi Arabia, and the Saudi-led coalition has retaliated with air strikes inside Yemen.

It said it had asked civilians to evacuate the airport before the strike, according to a statement carried by Saudi state media.

The airport has been closed to civilian flights since 2015 although U.N. planes have been permitted to land there.

A spokesperson for the U.N’s World Food Programme said a U.N. team was on the ground at the airport to verify the extent of any damage.

Houthi-run Saba media, quoting the head of the Houthi administration’s aviation authority, said the airport had been put out of operation.

He said the coalition had removed protections from specific sites in the airport which it said were being used for military purposes, and the operation was in accordance with international humanitarian law.

“The operation comes in response to threats and the use of the airport’s facilities to launch cross-border attacks,” it said.

On Sunday, the coalition said it had destroyed a drone launched from the airport aimed at Saudi Arabia’s King Abdullah airport in Jizan, near Yemen’s border. It also said it struck drones workshops in Sanaa city.

The coalition intervened in Yemen in 2015 after the Houthis ousted the internationally recognised government from Sanaa.