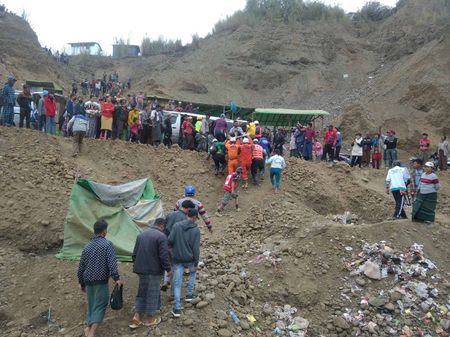 By Wa Lone and John Geddie

(Reuters) -At least one person was killed and scores were missing after a landslide of dirt and rubble ripped down the waste heap of a Myanmar jade mine, sweeping workers searching for fragments of the gems into a lake and burying them under the debris.

Throngs of their families stood on bare, muddy banks on the shores of the lake, as rescue workers in hard hats and hi-vis jackets searched the water in boats after Wednesday’s accident, pictures posted on Facebook by the fire department showed.

One body had been recovered from the scene before rescue operations were called off as night fell, and around 50 people still unaccounted for had likely also died, a fire department official at the scene told Reuters.

“It is so difficult to estimate how many were missing, but we estimate at least 50 missing and they have very little chance of survival,” said Pyae Nyein, captain of Hpakant Township’s fire department.

Kachin Network Development Foundation, a local civil society group involved in the rescue operation, earlier estimated the number missing at around 80 after the waste tore down the slag heap from some 200 feet (60 metres).

Two other rescue workers on the scene also said they feared the missing had likely perished in the latest tragedy to hit Myanmar’s poorly regulated jade industry.

The accident took place in the remote Hpakant area of Kachin State at around 4 a.m. (2130 GMT on Tuesday), the fire department said.

Deadly landslides and other accidents are common in Hpakant, the centre of Myanmar’s secretive jade industry which draws poor workers from across Myanmar in search of gems mostly for export to China.

In a landslide last weekend, media reported at least six people were killed.

Economic pressures due to the COVID-19 pandemic have drawn more migrants to the jade mines even as conflict has flared since Myanmar’s military seized power in a coup in February.

The ousted government of Nobel Peace laureate Aung San Suu Kyi had pledged to clean up the industry when it took power in 2016, but activists say little has changed.

In July last year, more than 170 people, many of them migrants, died in one of the worst disasters in Hpakant after mining waste collapsed into a lake.

Myanmar produces 90% of the world’s jade. Most comes from Hpakant, where rights groups say mining firms with links to military elites and ethnic armed groups make billions of dollars a year.