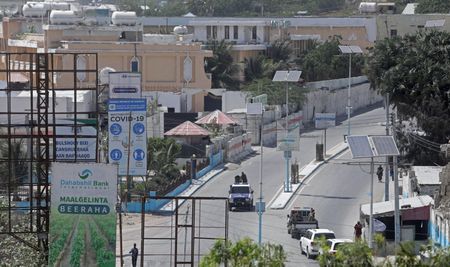 MOGADISHU (Reuters) -Hundreds of troops loyal to Somalia’s Prime Minister Mohammed Hussein Roble camped on Tuesday near the residence of his political rival President Mohamed Abdullahi Mohamed, a day after the president tried to suspend the prime minister.

Roble has called Mohamed’s plan to suspend him a coup attempt. A statement from the United States, which operates in Somalia against Islamist militants, called on all sides to avoid escalation but also appeared to back the prime minister.

A Reuters photographer at the scene said the security forces had taken no action by Tuesday afternoon apart from assembling. But the gathering spurred fears of a potential clash between forces loyal to the two men.

“Troops have camped in our village. …If the notorious Villa Somalia (presidential palace) starts war then there will be a crossfire,” Canab Osman, a mother of seven who operates a grocery shop in a nearby district of the capital Mogadishu told Reuters.

Another resident and local elder, Farah Ali, told Reuters security forces that had amassed in the area were fitting pickup trucks with artillery weapons.

Somalia, where no central government has held broad authority for 30 years, is in the midst of a protracted indirect election process to choose new leadership, repeatedly held up amid confrontation between Mohamed and Roble.

In April, an attempt by the president to extend his four-year term by two years led army factions loyal to each man to briefly seize rival positions in Mogadishu.

The U.S. State Department African Affairs Bureau said in a tweet late on Monday that it was prepared to act against those obstructing Somalia’s path to peace.

“The attempted suspension of … Roble is alarming and we support his efforts for rapid and credible elections,” the bureau said. “All parties must desist from escalatory actions and statements.”

In suspending Roble, Mohamed accused the prime minister of stealing land owned by the Somali National Army (SNA) and of interfering with a defence ministry investigation.

In response, Roble said Mohamed’s action was unconstitutional and aimed at derailing the election. He ordered security forces to start taking orders from him, rather than the president.

The months-long dispute between the prime minister and the president has distracted the government from fighting an insurgency against al Qaeda-linked group al Shabaab.

In a statement on Tuesday, the Council of Presidential Candidates, a group of politicians who plan to contest the election including two former presidents, called on Mohamed to step down “as soon as possible in order to end the crisis”.

Mohamed and Roble have accused each other of holding up the parliamentary elections, which began Nov. 1 and were supposed to be completed by Dec. 24. As of Saturday only 24 of 275 lower house representatives had been elected.

According to Somalia’s indirect electoral process, regional councils are meant to choose a senate. Clan elders are then meant to pick members of the lower house, which would then choose a new president at a date yet to be fixed.