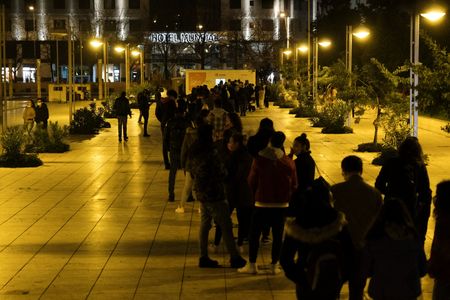 By Catarina Demony and Miguel Pereira

LISBON (Reuters) – Vitor Chitas started queuing at 6 a.m. on Christmas Eve for a COVID-19 test before meeting up with loved ones later on Friday amid a fresh surge in infections in Portugal.

The 66-year-old was at the front of a long queue that snaked around Lisbon’s Campo Pequeno bullring near to the testing centre, whose doors only opened at 9 a.m.

“I decided to get tested to feel safe with my family this Christmas,” Chitas said. “It doesn’t mean it’s completely safe but… it gives us some peace of mind.”

Long queues also formed outside pharmacies on Friday. Some Lisbonites even left the city to get tested due to a shortage of slots. Although home tests are also available they are not always valid to access certain venues, and many supermarkets have run out of them in the run-up to the Christmas holidays.

Portugal, population 10 million, reported 10,500 new infections on Thursday, the highest since January, though deaths and hospitalisations are far below levels seen at that time.

The country has one of the world’s highest rates of COVID-19 vaccination, with around 87% people fully inoculated.

Diana Rodrigues, 46, and her 14-year-old daughter Leonor are both vaccinated but said it was important to find out if they had been infected recently.

“We’ve been careful lately but this is important so we can be with our family as we weren’t able to be with them last year,” Rodrigues said as her daughter sat on a portable chair they brought to wait in the queue.

About half of the new cases in Portugal are from the Omicron variant.

Luciana Monteiro, 37, a Brazilian living in Lisbon, also joined the early morning queue at Campo Pequeno. She is spending Christmas with friends, and they all agreed to get tested.

“Precaution is crucial these days,” she said. “It’s better to avoid COVID-19 than to help it proliferate so things don’t return to how they were before, when everything was shut.”