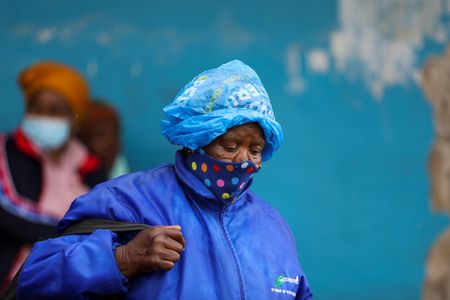 JOHANNESBURG (Reuters) – South Africa has recalled rules that no longer required people without symptoms of COVID-19 to isolate or test if they have been in contact with a positive case, the government announced on Tuesday, saying an amended circular will be re-issued.

Last week the health ministry said that asymptomatic individuals who had been in contact with a case of COVID-19 no longer had to isolate but should monitor for symptoms for 5-7 days and avoid attending large gatherings.

It had added that only those people who developed symptoms needed to get tested and that those with mild symptoms should isolate for eight days and severe cases for 10 days.

It had also revised protocols on quarantine, saying all quarantine facilities outside the home would be stopped, while contact tracing efforts would also be scrapped aside from in specific scenarios such as cluster outbreaks.

The reason for the revision was based on a number of scientific factors including the fact that, most people have vaccinated with at least one vaccine dose and developed some level of immunity. This has contributed to the current low hospitalisation and high recovery rates, the department said.

Now all those protocols will be recalled after the Department of Health was inundated with media, stakeholders and public enquiries and comments following the release of the revised regulations.

“In line with the principles of transparency and openness, the department has decided to put the implementation of the revised policy changes on hold, while taking all additional comments and inputs received into consideration,” it said in a statement.

“This means the status quo remains, and all prior existing regulations with regards to contact tracing, quarantine and isolation remain applicable.”

The country has led the continent in terms of COVID-19 cases and deaths as well as vaccinations, with 3.42 million cases reported and 90,854 fatalities.

Its experience has been closely watched around the world after it was among the first countries to identify the more transmissible Omicron variant.

Cases started declining this week, with 7,216 new cases and 25 deaths reported in the past 24 hours.