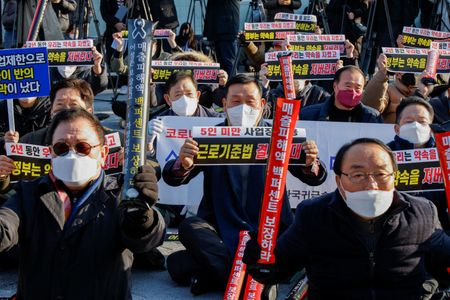 By Yeni Seo and Hyonhee Shin

SEOUL (Reuters) – Some 300 South Korean small business owners protested in Seoul on Wednesday over the return of strict social distancing rules, urging the government to compensate them for financial losses and scrap its “vaccine pass” policy.

South Korea restored tough distancing curbs this week after easing them in November, as new infections and serious cases continue to make new records and stretch medical services, despite a vaccination rate of over 92%.

The measures, effective until Jan. 2, include a 9 p.m. dining curfew and a ban on gatherings of more than four people, who have to be fully vaccinated. Unvaccinated people can only eat out alone, or should use takeout or delivery options.

The reimposed curbs have triggered a backlash from many small business owners who fear economic disaster, as they are already wrestling with snowballing losses and debt.

The government has offered some financial support and unveiled a new package last week including 1 million won ($838) in relief for each of around 3.2 million businesses that have suffered revenue reductions.

The protesters, however, said such one-off measures fall far short of making up their losses.

“We’ve followed the rules over the past two years because the government promised compensation … but they didn’t keep the promise,” said Yoon Sun-a, who runs four restaurants in Seoul.

Lee Sang-baek, from Uijeongbu, north of Seoul, said he was “barely holding out on an empty hope for tomorrow,” while many others have shut down, gone bankrupt or even taken their own lives.

President Moon Jae-in has apologised for reinstating the curbs and failing to stem the virus’ spread or secure enough hospital beds.

The rally was largely peaceful as organisers worked to keep to the 299 person limit on protests under the tightened curbs, though some people were seen in a brief tussle with police as they tried to join the event.

South Korea reported 7,456 COVID-19 cases on Tuesday, a week after posting a record daily count of 7,850, taking total infections to 583,065, including 234 cases of the highly transmissible Omicron variant. There have been 4,906 deaths.

The number of serious cases hit 1,063, another fresh high, with nearly 86% of intensive care unit beds occupied in the greater Seoul area.